The Close the Gap campaign aims to end the appalling life expectancy gap between Aboriginal and Torres Strait Islander Peoples and non-Indigenous Australians by 2030.

This is how — together — we’ve started to Close the Gap. Here are 10 of our favourite milestones over the last 10 years:

You can join in the celebrations on 17 March FIND one of the 1,290 EVENTS

1.Close the Gap launched to a groundswell of community support Australian sporting champions Cathy Freeman and Ian Thorpe launched the Close the Gap campaign (CTG) in Sydney. Led by a coalition of more than 40 Indigenous and non-Indigenous organisations, the campaign aims to achieve Aboriginal and Torres Strait Islander health equality within a generation.

2.Prime Minister first of many to sign the Statement of Intent On the back of mounting community calls for action, Australia’s Prime Minister and Opposition Leader signed the Statement of Intent in March 2008. Key ministers and other state and territory leaders soon followed. Here, Aboriginal parliamentarian, Ken Wyatt, signs the Close the Gap Statement of Intent.

3.Aussie celebrities back Close the Gap In 2008, Australian governments agreed to six ambitious targets across life expectancy, child mortality, education and employment as a blueprint to “close the gap”. Governments committed $1.6 billion in funding over three years. This action has contributed to improvements in Indigenous health over the past decade including a fall in diabetes. Here, Geraldton Aboriginal Health worker, Eric Dalgety, speaks with a young client, Kane.

5.NRL dedicates one round each year to Close the Gap The National Rugby League joined the campaign by dedicating a round each year to Close the Gap. In the process, many high-profile Indigenous NRL players — including Sam Thaiday from the Brisbane Broncos (pictured) — got behind the campaign. National Close the Gap Day (NCTGD) is held in March each year. Involving a huge variety of activities around the country, NCTGD is the key moment each year that Australians show their support for achieving health equality by 2030. This event has been getting bigger every year. Last year, 1,596 events involving more than 200,000 people took place around the country. In 2012, Laidley High School students spelled out Close the Gap with members of Kambu Aboriginal Medical Service (pictured). More than 200,000 Australians have so far signed the Close the Gap pledge calling for Australia’s federal, state and territory governments to achieve Indigenous health equality by 2030. This public pressure continues to ensure Indigenous health remains at the forefront of politicians minds. 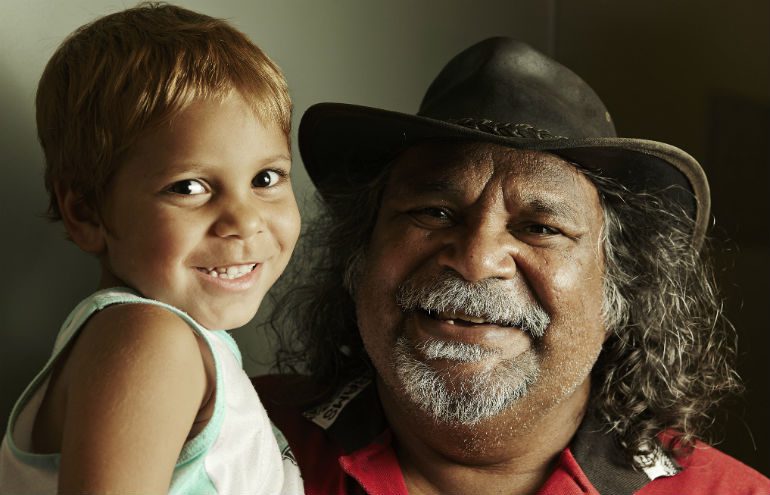 The CTG campaign was central to the Australian Government’s development of a national plan being produced in partnership with Aboriginal and Torres Strait Islander Peoples. Importantly, this plan recognises that improving Indigenous health will require action on social, emotional, spiritual, cultural and physical wellbeing, and must involve community-led solutions. PhotoJason Malouin/OxfamAUS

9.The call for politicians to recommit: “It’s our nation’s business” Indigenous representatives joined the Prime Minister for the Closing the Gap parliamentary breakfast in our nation’s capital last month. Lynore Geia, a nurse and health advocate in Queensland for more than 40 years, summed up many people’s thoughts at this breakfast with her comments delivered for this year’s NCTGD video: “Indigenous health is everyone’s business. It’s our nation’s business. [If] we’re about our nation moving … forward, then we have to deal with business. Together!”

10.We need you to be part of our 10 year milestone: register now for National Close the Gap Day 2016 While we’ve made some great progress towards closing the gap, we still have a long way to go to achieve health equality by 2030. Join us for the 10th anniversary year of the campaign by calling on governments to recommit to closing the gap. And the best way to do this? Register for National Close the Gap Day. Hold an activity of your choice in support of health equality across Australia.

“Celebrating the 10th Anniversary of the Close the Gap Campaign for the governments of Australia to commit to achieving equality  for Indigenous people in the areas of health and  life expectancy within 25 years.”

Response to this NACCHO media initiative has been nothing short of sensational over the past 3 years , with feedback from around the country suggesting we really kicked a few positive goals for national Aboriginal health.

Thanks to all our supporters, most especially our advertisers, NACCHO’S Aboriginal Health News is here to stay.

We are now looking to all our members, programs and sector stakeholders for advertising, compelling articles, eye-catching images and commentary for inclusion in our next edition.

This 24-page newspaper is produced and distributed as an insert in the Koori Mail, circulating 14,000 full-colour print copies nationally via newsagents and subscriptions.

Our audited readership (Audit Bureau of Circulations) is 100,000 readers!

Your advertising support means we can build this newspaper to a cost-neutral endeavour, thereby guaranteeing its future.

Rugby League is again getting behind a great cause, with this weekend’s Close the Gap Round (August 3-6) supporting Australia’s largest campaign to improve Indigenous health.

This year’s game-wide activities will again highlight the importance of working to improve Indigenous health, life expectancy and education and employment opportunities.

Over the round, NRL Club initiatives will include Indigenous-inspired jerseys, mentoring, leadership, cultural awareness sessions and Indigenous performances.

Sport plays a critical role in helping to close the gap, with many examples of lives being turned around through involvement in a local sporting club, with its community focus and health benefits for players.

Rugby League was the first sporting code in Australia to support the Close the Gap campaign with our inaugural Close the Gap Round held in 2009.

There’s no reason why all Australians can’t enjoy health equality so please show your support for closing the gap and sign the pledge when you go to support your team this round.

You can also sign the pledge, by logging on to www.oxfam.org.au/closethegap.