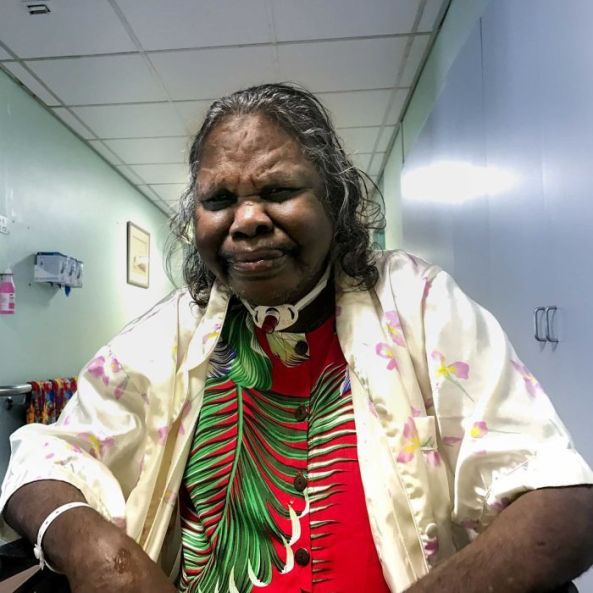 ” Katherine Hospital in the Northern Territory has gone from one of the worst facilities in the country when it comes to Indigenous health care to one of the best.

Their secret: engaging with Indigenous patients and supporting doctors.”

Dr Quilty his high level of specialist training has meant that patients who would have had to be evacuated to Royal Darwin Hospital can now receive treatment in Katherine. Full Story below

Photo above : Gaye is a 50 year-old cancer patient from Mataranka in the NT. Supplied: Simon Quilty

The Managing Two Worlds Together project aims to add to existing knowledge of what works well and what needs improvement in the system of care for Aboriginal patients from rural and remote areas of South Australia (and parts of the Northern Territory). It explores their complex patient journey.

The relationship between patients and health care providers is the foundation of care and requires communication across cultures, geography and life experiences. As a staff member in one rural Aboriginal Community Controlled Health Service put it: ‘It’s like managing two worlds together, it doesn’t always work’.

Do we need to close the gap on Aboriginal hospital experiences ?

How Katherine Hospital, once Australia’s worst for Indigenous health, became one of the best

As published ABC NEWS  By Hagar Cohen for Background Briefing

When physician Simon Quilty arrived at the hospital, it was going through a major crisis.

“What had happened in 2010 is that the hospital found itself in a situation where things were falling apart,” he says.

A number of doctors complained to the NT Medical Board about a lack of supervision and the impractical workload. The hospital was on the verge of shutting down.

More than one in four Indigenous patients left Katherine Hospital before completing treatment, often without informing staff, the worst rate in the nation. These “take own leave” cases are complex, but one factor is Indigenous patients’ perception of inadequate treatment.

It’s an issue plaguing the health system nationally: a 2014 Federal Health Department report found that racism contributes to the low rates of access to health services by Aboriginal people.

Similarly, the number of patients who “discharge against medical advice” is recorded and recognised by health departments as a key indicator for the quality of Aboriginal healthcare.

In the NT, 11 per cent of all Indigenous patients discharge themselves against medical advice.

“These people have very complex illnesses,” says Dr Quilty. “Many of them are highly likely, if not treated well, to resolve in significant injury or death. Hospitals in remote locations really need high expertise to deal with the very sick patients that turn up here.

“Thirteen and 15-year-olds are developing type 2 diabetes, they’ve got kidney impairment by the time they’re 22 and they’re on dialysis in their early 30s. It’s a bit terrifying really.”

Back from the brink

The NT Department of Health conducted an investigation into the staffing crisis at the Katherine Hospital. Its findings weren’t released publicly.

Background Briefing can reveal that the final report concluded that there were “significant deficiencies in nearly all the essential dimensions of safe clinical service provision”, adding that the “root cause is that the medical service model is unsustainable and becomes more unsustainable with each passing year”.

Six years ago, a new general manager and a group of new doctors arrived with an ambition to turn things around.

They’ve brought highly trained specialist doctors who are invested in the community, interpreters are used regularly and families of Indigenous patients are consulted on complex treatment plans.

In the past, interpreters were available but rarely used. Families weren’t a part of the consultation process. Many of the doctors were junior, and staff turnover was high.

The new management has made huge inroads in the way the hospital cares for Aboriginal patients.

This year, only 4 per cent of the Indigenous patients “took own leave”, making Katherine one of the best performing hospitals in the nation when it comes to caring for Aboriginal patients.

Systematic use of interpreters

In 2006, when respected Indigenous lawman Peter Limbunya, from the remote community of Kalkarindji, stayed in the hospital for 10 days, he did not have access to an interpreter, despite not speaking English.

At the end of his treatment, Mr Limbunya, who was part of the legendary Wave Hill walk off in the 60s, was flown to a remote airstrip 5 kilometres away from his community.

His family wasn’t told he’d be back that day and nobody was there to meet him. He died of dehydration.

During the inquest into his death, the coroner found that interpreters were not in use at the hospital.

His cousin, lifetime activist and advocate for Aboriginal people Josie Crawshaw, remains outraged. She says her uncle would have known “absolutely nothing” about his treatment and what was going on.

But things have come along way since then. The hospital’s Aboriginal liaison officer, Theresa Haidle, says improving the way doctors communicate is the key to developing Indigenous patients’ trust in their treatment plans.

Regular use of interpreters has been an essential part of Ms Haidle’s work. She says they’ve been key in making sure patients understand their illnesses and treatment options.

“English isn’t their first language. It may not even be their second or third either. If there’s any doubt, we get interpreters in, or even on the phone.”

The systematic use of interpreters is a big change at Katherine Hospital.

Ms Haidle says the hospital has a lot further to go when it comes to providing a culturally safe environment, but overall, the relationship with the Aboriginal community is getting better all the time.

“It’s like a big learning process for everybody,” she says.

“We have to break it down as simple as we can,” she says. “There’s not an Aboriginal word that means cancer, so how do you explain those things?

“I remember one day a lady had this fungus, and there’s no words for those things on women’s bodies, or inside. So I heard the interpreter telling her: ‘You know, like mushrooms growing?’ They got her to stay and get it treated.”

Pip Tallis, who is training to be a physician at Katherine Hospital, has worked in hospitals in Alice Springs and Darwin, where she says many of her Indigenous patients left before their treatment was complete.

“I found it really hard to understand why,” she says.

“It was frustrating as a doctor, and there was a lot of frustration among the staff and no-one really took the time to understand why people were taking their own leave, or really did anything to change it.

“I think, there was a bit of hands up in the air. ‘Whatever, what can we do about it? It’s their problem.'”

Dr Tallis says that her perspective has changed since coming to work at Katherine Hospital.

“I’ve spent six months working with the team here and observing how they engage with the patients, and I think that they do significant things to result in people not taking their own leave,” she says.

“Previously I was very inflexible. Now I spend a lot more time appreciating why people take their own leave.

“I’m also picking up the subtle signs on a patient who’s starting to not engage. I’ll sit down with them and explore their issues. And if they say they want to just go for a walk, you just say, ‘Would you like to take some medicine with you just in case you don’t come back?'”

These meetings are attended by social workers, doctors, nurses and admin staff.

At one such meeting, Dr Tallis mentions Jason, a 30-year-old patient from the remote community of Ngukurr, 330 kilometres south-east of Katherine.

Jason has tuberculosis, and has left the hospital during treatment once before. His family has convinced him to return. Dr Tallis explains at the meeting that Jason doesn’t like the hospital food, and that special food is being provided for him.

But there’s still a cultural divide. At the end of the meeting, Jason explains to another doctor that he thinks “white fella” medicine is too slow.

“I want to go back to bush medicine,” he says. “It’s better and works fast because we learned it from old people.”

The hospital’s general manager, Angela Brannelly, says the 2010 investigation into the staffing crisis recommended major changes to the way the hospital operates, its level of staffing and supervision.

She says supporting the medical staff was one of her first priorities.

“We took it very seriously and made some really serious changes to the way that the medical team was supported here. It was around ensuring that someone’s got their back,” she says.

Dr Quilty, who joined the hospital in 2012, was the first physician to have ever been employed at the hospital. Last year he won the Royal Australian College of Physicians’ medal for clinical service in rural and remote areas.

Photo: This dark-skinned baby doll is given to Indigenous women who suffer from dementia to comfort them. (ABC RN: Hagar Cohen)

His high level of specialist training has meant that patients who would have had to be evacuated to Royal Darwin Hospital can now receive treatment in Katherine. Since 2012, there has been a decrease of 43 per cent in the number of total aeromedical evacuations to Darwin.

Many Indigenous patients who live in remote communities don’t like going to Darwin to receive medical treatment because it’s far from family and the hospital is bigger and less personal.

Gaye, 50, a cancer patient who was transferred to Darwin for chemotherapy says she felt lonely in Darwin. “In Darwin I was always sad and crying a lot,” she says.

No-one in Darwin had realised that Gaye was deaf, which made communication with medical staff virtually impossible. In Katherine her deafness was recognised by the nurses and she was given a hearing aid, which she says made a huge difference to her mental health.

Katherine Hospital employs 24 doctors but none of them are Indigenous.

“That’s good advice for us, and it’s probably where we need to go in that space around seeking out Aboriginal medical officers to come and work for us,” she says.

“I think we have some work to do there, absolutely.”