”We have Aboriginal nurses as well as doctors who have undertaken PhDs,”

Indigenous Australians are enhancing their culture through  increased academic achievements.

Please note the spelling of indigenous is not NACCHO policy

Just 55 Aboriginal and Torres Strait Islander students were awarded PhDs in  Australia from1990 to 2000, but 219 students earned PhDs in the 11 years to  2011, a fourfold increase.

The number of Aboriginal and Torres Strait Islander students completing  doctoral degrees has quadrupled in the past two decades and a new generation is  preparing to influence the institutions of knowledge in Australia.

Dr Sana Mary Nakata, 30, whose father, Martin Nakata, was the first Torres  Strait Islander to complete a PhD, finished her doctorate in 2012 and is now  teaching political theory at Melbourne University. Her goals in doing a PhD were  twofold: ”To establish myself as one of this country’s first indigenous  political theorists – first as a political theorist and an indigenous political  theorist second,” Dr Nakata says.

”Indigenous people can make great contributions off the sporting field. I  would like the intellectual potential and contributions of Aboriginal and Torres  Strait Islander people recognised.”

Genevieve Grieves, 37, is the daughter of Dr Vicki Grieves, the first  Warraimay person to gain a PhD; in February she started a PhD at Melbourne  University to explore the representation of Aboriginal people in south-east  Australia and to help ”get projects going between universities, government  departments and museums that better present Aboriginal culture and give  Aboriginal people better access to their own culture”.

Ms Grieves says she is fortunate to have the precedent set by her mother, and  she in turn is helping others consider higher education. ”I’m normalising it  for younger people in the community around me.”

Just 55 Aboriginal and Torres Strait Islander students were awarded PhDs in  Australia from 1990 to 2000, but 219 students earned PhDs in the 11 years to  2011, a fourfold increase, according to the Department of Education. A  remarkable 143 PhDs were awarded in the five years to 2012, according to the  last available data. Moreover, 324 indigenous students were enrolled in PhDs in  Australia in 2012.

Professor Ian Anderson, assistant vice-chancellor for indigenous higher  education policy at Melbourne University, says the increase ”represents a  maturation of the education agenda and is significant in terms of a growing  intergenerational achievement. It will enable Aboriginal people to have input  into the knowledge economy, inspire policy and influence political  decision-making, leadership and institutional reform.”

According to the last census data, 362 indigenous Australians had PhDs in  2011, including honorary or overseas doctorates; 28 doctorates were awarded in  2012 in Australia and data for 2013 is still to be added, so it’s likely the  number of Aboriginal and Torres Strait Islander people with PhDs in Australia  has topped 400.

Although these numbers are still a long way from a benchmark parity rate of  2.2 per cent with the non-indigenous population recommended by a 2012 review of  indigenous higher education, the growth is having a multiplier effect.

In 2007, Misty Jenkins, from Ballarat and Gunditjmara descent, became the  first indigenous person to study at Oxford and then Cambridge University, after  completing a PhD in immunology at Melbourne University. Although her research on  cancer cell death at the Peter MacCallum Cancer Centre is not specifically  indigenous, she sits on several boards devoted to indigenous higher education  and research. She also helped expand indigenous postgraduate programs at  Cambridge and Oxford, where Paul Gray, in experimental psychology, and Christian  Thompson, in fine arts, are this year completing PhDs.

Aboriginal and Torres Strait Islander people did not enter tertiary education  until the 1950s. Dr Margo Weir, 74, finished a diploma in physical education in  1959 at Melbourne University and completed a PhD in curriculum design and  evaluation in 2000. ”It’s the PhDs in institutions that influence the knowledge  parameters of those disciplines,” she says. ”If you are an Aboriginal PhD, you  are importing Aboriginal culture and knowledge into that framework.”

Another change wrought by having more Aboriginal and Torres Strait Islander  academics  could be enhanced debate across communities. ”At the moment there  are one or two voices that dominate, Professor Larkin says. ”We might have  those views challenged, and I think that’s a good thing. Out of difference comes  creativity and innovation.”

If Aboriginal PhD graduates are to influence indigenous politics, doctorates  may need to generate ”different analyses and contribute new knowledge”, Dr  Sana Nakata says, to which Professor Larkin adds: ”Our understanding of  disadvantage, for example, may need to change to generate new ways to tackle  it.”

Dr Grieves, a research fellow at the University of Sydney, says indigenous  knowledge is being recognised in universities around the world but she is  philosophical about its political impact in Australia. ”Our PhD system is not a  system that produces academic activists like those in other parts of the  world,” she says. ”The education system here is really about individual career  plans. I don’t hold out a lot of hope that 400 Aboriginal people with PhDs are  going to change things for Aboriginal people.

Dr Grieves believes people who have been activists should be running research  programs, ”but they’re not”.

”Those people – Gary Foley, Jim Everett and Paul Coe, for example – have  been our great thinkers and researchers,” she says. Gary Foley was awarded a  PhD for research on the history of Aboriginal organisations last year.

She also points to concerns that people with PhDs ”are not being employed in  top positions at universities in favour of Aboriginal bureaucrats”.

The growth in doctoral numbers can be attributed to several factors,  including better supervision, more scholarship programs, and the establishment  of centres such as Murrup Barak at the University of Melbourne and Nura Gili at  UNSW.

Dr Bill Jonas, a Worimi man and the first indigenous person to receive a PhD,  in 1980, cites the importance of indigenous research centres established at five  universities in the mid-1990s and, before that, programs designed to help  Aboriginal people with lower entry scores get into academic programs.

”We have Aboriginal nurses as well as doctors who have undertaken PhDs,” he  says.

According to census data, Aboriginal PhD students are more likely to study  society and culture, education and the arts,  and are under-represented in the  fields of health, science and engineering.

But these trends may already be changing, according to Professor Martin  Nakata, who chairs Australian Indigenous Education and is director of Nura Gili  at the University of NSW. More than 40 per cent of the 340 undergraduate  students at UNSW last year were studying law, maths or science, and more than 60  were studying medicine, he says.

These doctorates have been achieved by the ”individual effort and sheer  commitment of student and supervisor”, Professor Nakata says. ”If anything,  this achievement has been due to their effort. I know what it’s like to work in  knowledge convergences, and it’s tough.”

Dr Grieves adds: ”We come from one of the longest surviving cultures in the  world, which is, and has always been, a highly intellectual culture.”

The importance of our NACCHO member Aboriginal community controlled health services (ACCHS) is not fully recognised by governments.

The economic benefits of ACCHS has not been recognised at all.

A good way of demonstrating how economically valuable ACCHS are is to showcase our success at a national summit. 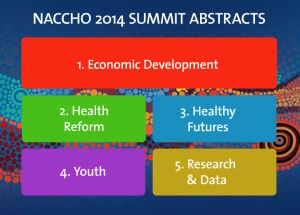