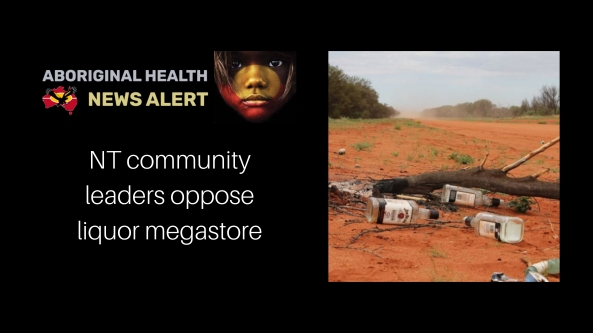 Opponents of the large-scale Dan Murphy’s outlet planned for Darwin, within walking distance of three dry Aboriginal communities, are targeting shareholders and board members of supermarket giant Woolworths, urging the parent company to abandon the continued liquor store proposal. An open letter timed to coincide with the Woolworths annual general meeting today is signed by NACCHO CEO Pat Turner, as well as the heads of NT health and social groups and the Foundation for Alcohol Research and Education (FARE).

The letter says the proposed outlet, which was rejected for the location currently proposed on public health grounds, risks undermining progress made since the introduction of government reforms to tackle the NT’s high rates of alcohol-related harm. The letter reads “The Dan Murphy’s you want to build will be one of the biggest bottle shops in Australia. We know that the more alcohol you sell, the more harm it causes in our community. We ask you to stop this plan to profit from people who are at their most vulnerable.”

Aboriginal Medical Services Alliance NT (AMSANT) CEO, John Paterson said “Aboriginal and Torres Strait Islander and community organisations have made it clear that we don’t want Woolworths here, pushing their cheap grog on our people. The absolute hypocrisy of Woolworths taking this action, while being a partner of NAIDOC Week, is almost unbelievable. Corporations do not make decisions, people make decisions and Directors need to face up to the impact this will have on the lives of children and families.”

Caterina Giorgi, CEO of the Foundation of Alcohol Research and Education (FARE) agreed with John Paterson, saying “Woolworths has been fighting for five years to build this alcohol superstore despite knowing the harm it will cause. By ignoring the community’s voice and the clear advice from the Independent Liquor Commission, Woolworths Directors are shamelessly putting their profits ahead of the health and wellbeing of the community.”

In an article published in Croakey – independent, in-depth social journalism for health, AMSANT CEO John Paterson warned of the health and social costs of the move, which risk reversing big efforts to date to tackle the many harms from alcohol. It is feared the new laws being debated this week will open up the possibility for Woolworths, the owner of Dan Murphy’s, to build one of the largest bottle shops in the country within walking distance of three dry Aboriginal communities — Bagot, Kulaluk and Minmarama.