The  $5 million project will provide education, equipment and specialist support to 27 Aboriginal Medical Services in Queensland.

The Queensland Government has paid tribute to Her Majesty the Queen’s Diamond Jubilee by providing $5 million in funding for a world-first project aimed at treating and preventing avoidable blindness in Aboriginal and Torres Strait Islander communities.

“This project will leave a lasting legacy in tribute to Her Majesty the Queen,” Mr Springborg said.

“Diabetes affects one in three adult Aboriginal and Torres Strait Islander people in Queensland and can have a debilitating impact on the sufferers’ vision.

“However, most blindness caused by diabetes can be prevented, which is why this project is so important.”

“The Newman Government is committed to providing the best health services at the best time and in the best place,” he said.

“A van equipped with state of the art optical equipment will travel to nine regional hubs where local and visiting eye specialists will treat patients.

“The project will provide a comprehensive screening program to identify at risk clients and screen for diabetic eye disease. 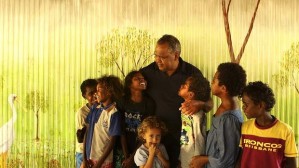 Picture Noel Pearson on Cape York with some of his mob: Picture The Age

It is clear that communities in Cape York are making changes and want to take responsibility for themselves and their families. We will continue to support them to do this.”

The Australian Government will invest $24.5 million over two years to build on the significant gains that have been made in improving Aboriginal people’s lives in the four communities participating in the Cape York Welfare Reform trial.

This funding injection in the 2013-14 Budget will continue the Family Responsibilities Commission (FRC) and other key parts of the program, as well as introducing new measures to further support school enrolment and attendance, and re-engage disengaged youth with education, jobs and life skills in the communities of Aurukun, Coen, Hope Vale and Mossman Gorge.

“The recently released evaluation of the Cape York trial showed that the Family Responsibility Commission is very effective in increasing parental responsibility and school attendance amongst many families it works with,” Ms Macklin said.

“While we have seen a significant increase in school attendance through the trial, it is clear that for some families more needs to be done to ensure all children are getting a decent education and attending school every day in all four communities.

“The local Family Responsibility Commissioners have told us that further efforts are needed to engage hard to reach families and ensure they send their children to school.

“That is why we want to work with the Family Responsibility Commission and our welfare reform partners to implement SEAM as part of the Cape York welfare reforms, with a key role for the FRC.

“The Queensland Government has a key role to play in ensuring children attend school and I am asking them to work with us to support the introduction of SEAM in these communities.”

Under the enrolment component of SEAM, parents will be required, if requested, to demonstrate to Centrelink that their children are enrolled at school.

The Family Responsible Commission will be made aware of parents of children who are not enrolled and will work with them to address any barriers to enrolment.

If children fall below the set attendance benchmark, the Family Responsibility Commission will work with families, the schools and Centrelink to develop attendance plans.

If parents do not meet their part of the agreed attendance plan, income support payments may be suspended. Payments will be reinstated once the parent complies with their responsibilities.

Ms Macklin said that the evaluation also showed that there a number of young people who are not participating in education, training or employment.

“We want to see young people fulfilling their potential and learning the benefits of personal responsibility,” Ms Macklin said.

“That is why we will also introduce a package of measures to support disengaged young people between the ages of 16 and 21.”

Newly funded youth workers will be available to provide better support to young people in the communities.  They will work closely with the FRC and with disengaged young people to help them develop an action plan to undertake education or training, address any barriers to participation, develop the skills needed to get a job, and where relevant, improve their parenting skills. The FRC will also have the option of referring them to income management.

Ms Macklin said that while progress has been made in the Cape York Welfare Reform communities, the Australian Government did not underestimate the challenges that remain.

“It is clear that communities in Cape York are making changes and want to take responsibility for themselves and their families. We will continue to support them to do this.”

“The Australian Government’s continued investment and the introduction of the additional measures will help build on the significant gains already made, as well as target the harder to reach groups in the communities,” Ms Macklin said.

“Local communities have shown they want to take responsibility and the Australian Government is committed to working with them to do this.

“The Queensland Government has a clear role to play in relation to school attendance and support for disengaged young people, as well as in ensuring that the important gains already made through the Cape York Welfare Reforms are not lost.

“I will continue to urge the Queensland Government to fulfil their ongoing responsibility to the people of Cape York.”

Queensland appears intent on dismantling its public and preventive health services. Health Minister Lawrence Springborg last week outlined the rationale for getting rid of more than 150 jobs in nutrition, health promotion and Indigenous health, arguing previous “campaigns” and “messaging” around obesity were “piecemeal” and had “grossly failed”.

The plan now, the minister argued, is to focus on a new centrally-driven and high-profile approach.

On the surface that doesn’t sound so bad.  But even a cursory glance at the details suggests something else is going on.

Of particular concern is the Queensland government’s call for the Commonwealth to invest more in preventive health through the Australia-wide Medicare Local network. This may be a bold attempt to shift costs, or a fundamental misunderstanding of what preventive health is all about – or both.

Although it’s good to see Minister Springborg confirming a commitment to “health prevention campaigns” and “evidence-based medicine”, questions remain as to what this really means for public health in Queensland.

One challenge working in the area of obesity is that most people, including decision makers, eat and move, and so are self-informed experts. If this was brain surgery, expert briefings on the evidence would be sought before decisions were made. But addressing obesity is more complex.

At the first level, there is little disagreement about the magnitude of the problem; something definitely needs to be done about obesity – and urgently. The epidemic of overweight and obesity is sweeping most developed economies. In Australia, the prevalencehas doubled over the past 30 years – it’s now above 60% in adults and around 25% in children.

Obesity is bad news for the health system. In Queensland, excess body weight has now overtaken cigarette smoking as the single greatest risk factor contributing to the burden of disease. In 2008, the health system cost of obesity was A$391 million, with an additional cost of about A$9.96bn in lost well-being across all sectors throughout the state.

But the good news is that most obesity-related conditions are preventable. That such an enormous expense and burden is avoidable, must surely be of interest to any government concerned about its economic outlook, and the well-being and health of its people.

What should be done about it?

To answer, it’s necessary to look at both causes and treatment outcomes.

A surprisingly small daily excess in energy intake is sufficient to account for the weight gain seen in Australians over time.

It’s now clear that changes to our socioeconomic environment are responsible for the current epidemic. These changes actually make it easier for all of us (but particularly those who have limited resources and opportunities) to consume more energy-dense and nutrient-poor foods and drinks, to eat too much, to sit longer and move less.

Being overweight is a normal physiological response to an abnormal “obesogenic” environment. And this is exactly why losing weight is so hard – and keeping it off is harder still.

Studies showconsistently that just telling people to change their behaviour is bound to fail. Generally, mass media advertising increases awareness, but only leads to behaviour change when supported by complementary policies, programs and services provided within the community.

How can we achieve healthy weight at a population level?

Strategically, the best approach to obesity prevention involves regulatory reform. This has been demonstrated repeatedly in other public health areas such as infectious disease, traffic safety and tobacco control. However, there is little evidence that any governments in Australia currently want to go down this path to combat obesity.

So at a more pragmatic, operational level, the evidence points to two main areas:

And that is exactly what the dismissed nutrition, Indigenous and health promotion workforce was doing in Queensland.

In areas such as mental health and infant feeding, they developed evidence-based training materials and resources to help lighten the workload of clinicians. And their efforts were having traction and providing cost- effective health outcomes for the state.

In 2007, the rate of measured (rather than self-reported) healthy weight among children in Queensland was 2% to 3% higher than in other states where comparable data was available. This equates to 3,000 less children becoming overweight per year, and 1,200 fewer future cases of Type 2 Diabetes per year by 2015.

At its peak, the multi-strategy Go for 2 and 5 fruit and vegetable promotion program exceeded targets, resulting in an additional turnover of A$9.8 million of fresh produce per month in Brisbane alone, and a technical saving of A$55 million per year to the ill-health system state-wide.

Since 2004, adult physical activity participation rates had increased by over 34%.

And since 2003, rates of exclusive breastfeeding for the first six months of life had quadrupled, and the proportion of infants breastfed at one and six months had increased substantially.

Within the health sector, preventive health interventions to address obesity must be applied across the whole continuum – not only in primary care settings like Medicare Locals. But most importantly, concerted, sustained effort is needed beyond the health sector, with non-government organisations, industry and all members of the community.

So, fingers crossed that the promised new “campaigns” will provide more than expensive advertising telling us all to lose weight. And fingers crossed that Medicare Locals will have the resources and abilities to foster partnerships to improve the toxic “obesogenic” environments that continually undermine health messages.

Because, if not, we will definitely lose the war against obesity and growing rates of chronic disease in Queensland. All available evidence tells us that more investment is needed in preventive health – not cuts.