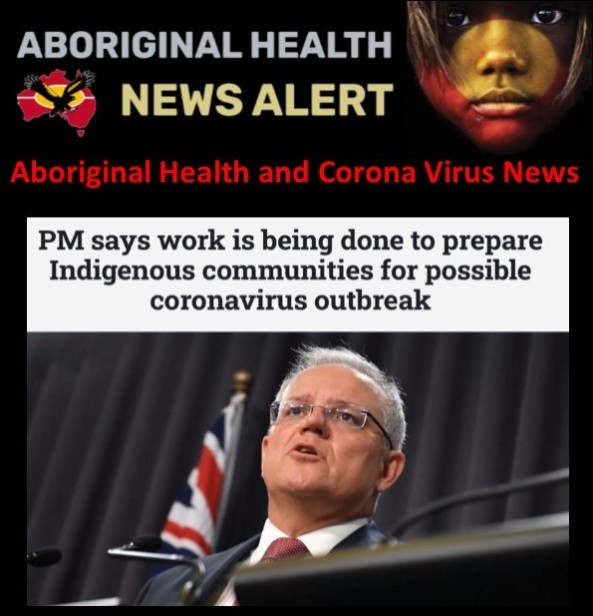 “ Given the level of chronic disease Aboriginal people suffer that makes them vulnerable.

People are concerned about the spread of this – but putting in place a whole series of measures that’s what we have to do.

Communication was essential towards educating communities about the risks posed by the virus – but cautioned against undue panic.

Everyone is better equipped in terms of information this time around and are better informed.

What’s important is we don’t take our feet off the pedal that we continue to make sure people are engaged.”

“And we also suffer a lot of chronic disease, which makes elderly patients more susceptible to any infection.

Testing is another worry — it takes at least a week if you live in a place like Balgo because the sample has to go to the nearest town, Broome, and then down to Perth.

She said she understood that one Pilbara community was restricting access by outsiders as an infection control measure, but Kimberley communities were open.

A number of workers in the Kimberley medical service’s five remote clinics servicing 10 communities had “self-selected” and isolated themselves for a time after returning from countries flagged as of concern.

We may end up with staffing problems in remote clinics if that escalates.”

Lorraine Anderson, medical director of the Kimberley Aboriginal Medical Service, said remote clinics were already on the lookout for symptoms consistent with the virus.

Indigenous health organisations will gather in Canberra next Tuesday to discuss the threat the virus poses to communities with little ability to isolate patients.

Dr Anderson said it was difficult to isolate people in communities where housing was scarce. See Part 3 Below 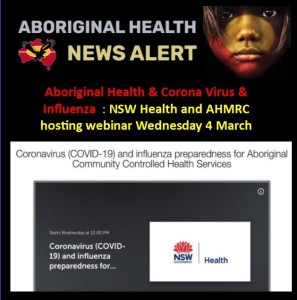 This webinar will focus on coronavirus and influenza and what you and your service can do to protect your communities.

The following people will be speaking and there will be an opportunity to raise and discuss concerns and needs that you have:

The link to participate in the webinar is here:

Part 2 The Federal Government is concerned about the potential for coronavirus to spread in remote Indigenous communities. 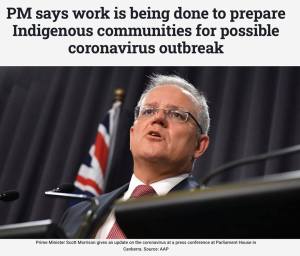 There have been no known COVID-19 cases among Indigenous Australians to date – but work is already being done to prepare the “vulnerability” of these populations against possible infection.

“We have been engaging with Indigenous leaders because in remote Indigenous communities if the virus were to get to those places, obviously there is a real vulnerability there,” he said.

“So we have been reaching out to those communities to work through how preparedness can be put in place.”

Some 10,000 coronavirus tests have been carried out here, with 34 people returning positive results including the first person-to-person transmissions in the country.

The University of Queensland’s Professor James Ward is one of those who has been working “hard” behind the scenes to prepare Indigenous communities.

The Federal Government will be distributing national guidelines over how to respond to COVID-19 if it appears in these populations.

Mr Ward told SBS News the remoteness, limited access to health services, vulnerability to disease and mobility of Indigenous communities could all make them more at risk.

“The longer this goes on … the greater the chances are of it reaching some of our most remote communities,” he said.

He said the potential for individuals to live in crowded living situations could also be a factor.

“We are working very hard behind the scenes to get our communities prepared,” he said.

“We’ve already seen in previous pandemics in 2009 – it affected the most remote of our communities.”

Research published following the 2009 A(H1N1) swine flu outbreak showed that Aboriginal and Torres Strait Islander people made up 11 per cent of all identified cases, 20 per cent of hospitalisations and 13 per cent of deaths.

This is despite them making up just three per cent of the population – meaning Indigenous people were 8.5 times more likely to be hospitalised.

Mr Ward said steps are being taken to make sure Indigenous communities are better prepared this time and ensure they are not deterred from accessing health services.

He said communication needed to involve families and communities in decision-making over quarantine measures and in providing local health services additional support as required.

“The response has to proportionate to the risks in individual communities around the country,” he said.

“How do we communicate this in a way that doesn’t create fear and panic and moves populations away unnecessarily from other communities to their own?”

Globally there have been more than 88,500 infections and at least 3000 deaths spanning some 70 countries and regions.

A Pilbara miner is at the centre of a coronavirus scare, with resources workers and remote communities fearing they could be dangerously exposed.

The worker at the Fortescue Metals’ Christmas Creek mine has been placed in isolation after returning from Indonesia with flu-like symptoms.

“One of our team members has presented with symptoms that meet the Department of Health’s minimum criteria for testing for COVID-19,” FMG chief executive Elizabeth Gaines said. “We are implementing all necessary precautions in accordance with health guidelines.

“The employee has been isolated pending the outcome of the test, which we anticipate receiving within 48 hours.”

Clinics in Aboriginal communities are also concerned, particularly given relatively high rates of diabetes and heart and lung conditions.

Scott Morrison said on Wednesday that the federal government was talking to Aboriginal leaders “because in remote indigenous communities if the virus were to get to those places, obviously there was a real vulnerability there”.

“And so we’ve been reaching out to those communities to work through how preparedness can be put in place,” the Prime Minister said.