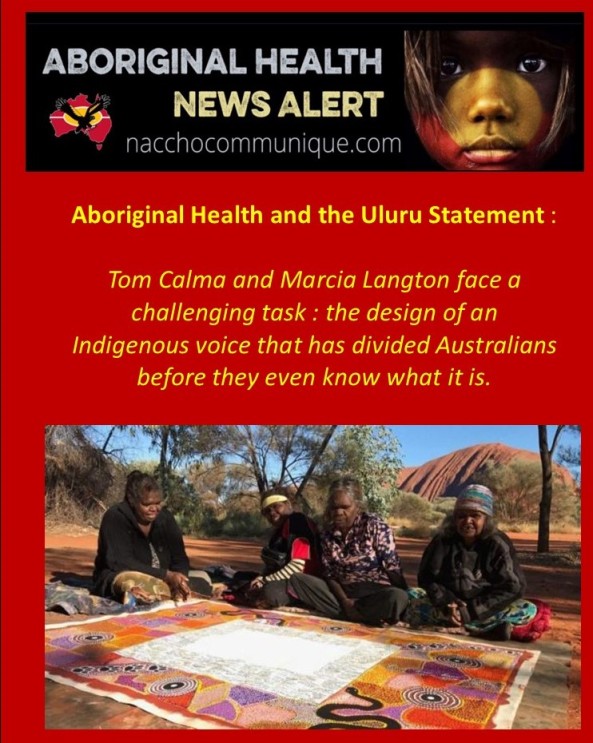 “I try to see and understand other points of view,”

There is danger in just always consulting people with the same views … You might not agree with them but their views might represent an entire group of people and if that is the case you have to hear them.

It’s a very complex task that we have. It’s got to be recognised that it’s not simple and there are multiple layers to this. What we have got to do is look at mechanisms that are going to work and are going to have some longevity.

Tom Calma was a crucial voice in the volatile days after the Cronulla race riots, through the Northern Territory intervention and during the tumultuous demise of the Aborig­inal and Torres Strait Islander Commission.

From the Australian 20 December

As Australia’s race discrimination commissioner from 2004 to 2009, he used skills honed as a social worker and later as a senior diplomat in India and Japan.

Now 65, Calma faces what may be his most challenging task yet: the design of an indigenous voice that has divided Australians before they even know what it is.

Calma, an Aboriginal elder from the Kungarakan and Iwaidja tribal groups in the Northern Territory, knows there is not much time.

He is co-chairman of a 19-member senior advisory group that has until October next year to present Indigenous Australians Minister Ken Wyatt with a new way forward in indigenous affairs. Wyatt’s advisory group met last month for the first time. The second meeting is in February, when work begins with two new co-design groups

He is working side by side with distinguished indigenous academic Marcia Langton. The first associate provost at the University of Melbourne also has been a formidable advocate on almost every major issue affecting Aboriginal and Torres Strait Islander people since the 1970s, from land rights and deaths in custody to violence against women and children.

“This is why we have these intransigent gaps,” Langton says. “We have this recurring problem of our federal system being unable to deliver citizenship entitlements to Aboriginal citizens. It is a separate problem from constitutional recognition.”

States have to do their part, Langton argues. “It’s not about (the states) doing more,” she adds. “The problem is they have always done less than they should do.

“They have taken the view, contrary to our Constitution, that they don’t have to provide any services to indigenous people and they have flicked it to the commonwealth. Aboriginal people are the victims in this endless political football game.”

Langton, a descendant of the Yiman and Bidjara nations of Queensland, says the “core issue” dates back to 1901.

“The commonwealth has ended up paying for what the states should have been paying for all along,” she says. “You end up with the states refusing to pay for these responsibilities that they are constitutionally required to fund, so they under-invest in indigenous education, indigenous housing.

“It goes right back to the colonial times when the writers of the Constitution were trying to invent the commonwealth and come up with this arrangement that en­abled NSW and Victoria — the two states with the biggest white populations — to commandeer most of the taxes.

“And the way that they did that was by making it unconstitutional to count Aboriginal people because the remaining Aboriginal populations were in the states such as Queensland, NT and Western Australia.

“We still have that problem from Federation of the states trying to avoid using taxes collected by the commonwealth being distributed to services intended for Aboriginal people.”

Calma, Langton and the rest of the advisory group in February will meet the members of two new groups appointed to help them figure out how the multiple layers of the voice can work, from remote communities and small towns to Canberra.

It will be the job of one of those groups to advise how to give a voice to indigenous people at a local and regional level. The other will focus on national representation.

Already, Langton and Calma agree that the multi-layered structure that becomes the voice should work with, not against, existing indigenous organisations that function well. And they understand that indigenous people favour elected representatives.

The voice is one of three key reforms set out in the 2017 Uluru Statement from the Heart. That document was the culmination of 13 dialogues with indigenous people around Australia and it called for voice, treaty, truth.

It was the end of a process that many consider was started in 2007 when John Howard, the prime minister at the time, promised a referendum seeking to amend the Constitution to “recognise the special status of Aboriginal and Torres Strait Islanders as the first peoples of our nation”.

He lost office soon after but the Expert Panel on Constitutional Recognition of Indigenous Australians led to the popular Recognise campaign. In 2015, prime minister Malcolm Turnbull and opposition leader Bill Shorten established the Referendum Council to ask the Aboriginal and Torres Strait Islander community about constitutional recognition.

After consultations with 1200 indigenous people, the answer came in the form of the Uluru statement.

It was not exactly what the government wanted to hear. There were grumbles — some quiet and some not so quiet — that the Referendum Council had wandered outside its brief. There, in black and white, was a formal call for a constitutionally enshrined voice to parliament.

Turnbull quickly rejected this because, he said, it would become a third chamber of parliament and “neither desirable nor capable of winning acceptance at referendum”.

But there was significant support, including from some inside government. Mining giants BHP and Rio Tinto got on board. Woolworths — Australia’s biggest employer — and two former High Court chief justices backed the Uluru statement.

On Australia Day this year, Wyatt — who was then indigenous health minister — wore a T-shirt printed with the words “We support the Uluru Statement” at a celebration of indigenous music in Perth’s Supreme Court gardens. The mission-born Noongar man posed, smiling, for a photo with Fraser government indigenous affairs minister Fred Chaney and their friend David Collard, a Noongar man.

Wyatt’s show of support for Uluru might have been considered defiant — even provocative — except that he was widely believed to be on his way out of politics. He had told journalists he would like to be the indigenous affairs minister if the Coalition was returned at the May election and if he held his very marginal seat. This declaration was met with polite silence because very few believed either of those things was likely.

But the Coalition won. And Wyatt, who had worked hard in his electorate despite his responsibilities in the portfolios of aged care and indigenous health, did better than cling on to his key seat of Hasluck. He was returned with a 3.3 per cent swing towards him and within weeks he was Australia’s first indigenous minister for indigenous affairs. He changed the job title to Minister for Indigenous Australians.

Wyatt has said he is being practical about what is likely to succeed and what is not. Repeatedly, he has stressed that Australians are conservative when it comes to changing the nation’s “birth certificate”. Of the 88 nationwide referendums held since Federation, only eight have succeeded.

So what becomes of the voice? The Morrison government clearly still wants one, just not in the Constitution. It has committed $7.3m to what Wyatt calls a “co-design” process.

Not all appointments to the group were expected and not everyone is on the friendliest of terms. Chris Kenny, Sky News broadcaster and columnist for The Australian, was surprised and pleased to be invited.

He has written that the description of the voice as a “third chamber” has been particularly damaging and was never a justifiable way to describe an advisory body. In that sense, Kenny is in agreement with many of his fellow advisory group members. Group members whose politics do not align are committed to co-designing the voice, The Australian has been told.

Langton and Calma believe the group can work well together.

Langton has strong ideas, but she also stresses she does not want to be prescriptive or rule anything out because others on the group may have different ideas.

“A great deal of damage can be caused to indigenous people if we don’t get this right,” Langton says.

Calma is not apprehensive about encountering opposing views. He describes it as “an opportunity to bring them onside or modify your own views maybe”.

“You look at what we have built with Reconciliation Australia as an example,” he said.

“The more people become informed, the more they understand the issues, the more likely they are to come on board.”

Wyatt has previously said the voice should not be a resurrection of ATSIC, the representative body killed off by the Howard ­government in 2005 after a corruption scandal at the top of the organisation.

Langton agrees ATSIC was flawed, but not for the reasons most people might think. “There is a lot of resistance to anything that looks or smells like ATSIC,” she says. “There is a misinformed view. It’s a shame that this still persists 14 years after the demise of ATSIC.

“The problem of the alleged corruption of two commissioners that the then prime minister made so much of was not the problem … The problem was ATSIC did not do the job that it was intended to do from the beginning because there were flaws in its design and its implementation.

“It was an early experiment. Back then there were high hopes ATSIC would be the answer so there was a great deal of enthusiasm, and rightly so, and it deserved a better chance than it got. I really believe that.”

Langton has not given up hope that, once defined, the voice could still be constitutionally enshrined. Asked if she felt other Australians would want that too, she says: “I do. If they understand the problem and it’s put to them in a way that makes sense to them, yes.”

After 2,832 Aboriginal Health Alerts over 7 and half years from www.nacchocommunique.com NACCHO media will cease publishing from this site as from 31 December 2019 and resume mid January 2020 with posts from www.naccho.org.au

For historical and research purposes all posts 2012-2019 will remain on www.nacchocommunique.com

Your current email subscription will be automatically transferred to our new Aboriginal Health News Alerts Subscriber service that will offer you the options of Daily , Weekly or Monthly alerts