“Rates of obesity are high among Aboriginal children, but there’s a lack of policies, guidelines and programs to tackle the issue. Now a new paper published this week in the December issue of Public Health Research & Practice is calling for more meaningful engagement with Aboriginal communities to better address childhood obesity.
Here, lead author Simone Sherriff, a Wotjobaluk woman, PhD student and project officer with the Study of Environment on Aboriginal Resilience and Child Health (SEARCH) at the Sax Institute talks about the paper and her take on the obesity challenges facing Aboriginal communities.

The National Aboriginal Community Controlled Health Organisation (NACCHO) and the RACGP’s National guide to a preventive health assessment for Aboriginal and Torres Strait Islander people covers further information on food insecurity in these chapters:
Q: Childhood obesity is a national concern, but as your paper points out, Aboriginal children are far more profoundly affected than non-Aboriginal children. What’s going on? A: I think it’s complicated, but in order to better understand Aboriginal childhood obesity we need to look beyond general individual risk factors, and consider how colonisation has impacted and continues to impact on the health and wellbeing of our people and communities today.

For example, Aboriginal people were forced off Country, unable to access traditional foods and made to adopt unhealthy western diets whilst living on missions and reserves.

Another thing that should be considered is the exclusion of Aboriginal people in Australia from education, health, politics and all systems, so it’s no wonder we see a gap between our health and the rest of the Australian population and continue to see a lack of relevant policies and programs from state and national governments.

These bigger structural and systemic issues are like a waterfall flowing on to affect communities, families and individuals. And until these issues are addressed, it’s going to be very difficult to close the gap on childhood obesity.

A: There are many great healthy lifestyle programs for preventing childhood obesity within our Aboriginal Community Controlled Health Service (ACCHS) sector, but generally there’s a lack of investment and funding into these services by government.

This is unfortunate because I think the rest of Australia could learn a lot from the model of healthcare that the ACCHS sector provides for our people. As Darryl Wright, the CEO of Tharawal Aboriginal Medical Corporation always says – our ACCHSs are like one-stop shops catering for all parts of a person’s health and wellbeing. So rather than looking at childhood obesity and thinking only about healthy eating and exercise, this kind of model considers a more holistic approach and the range of things that could be impacting on a person’s health and the community.

As mentioned in our paper, there are also a number of government and mainstream programs targeting healthy weight that have been culturally adapted for Aboriginal children and families. One example is the NSW Go4Fun program, which is designed for 7- to 13-year-olds who are above a healthy weight. When they did an evaluation of the mainstream Go4Fun program, they noticed that there were quite a few Aboriginal children who came into the program, but they had very low completion rates.

This evaluation led Go4Fun to consult with Aboriginal organisations and communities to understand how to improve the program to be more culturally appropriate. And as a result, organisers changed the way they were running the program and also set up Aboriginal advisory groups at local health districts. It’ll be interesting to see if this has positive impacts for the local participating communities.

Q: What are the biggest challenges for these existing programs?

A: There are a few, but the biggest challenge is that these programs are created and developed by non-Aboriginal people for Aboriginal children, meaning that they’re not always relevant, or they don’t consider the holistic approach that’s required to address childhood obesity.

We also need to consider the focus of these programs, which are currently targeting childhood obesity with healthy eating, education and physical activity. Although these are really important, lots of Aboriginal families are food insecure – which means they’re running out of food and can’t access food or afford to buy more. Recent data shows that 1 in 4 Aboriginal people are food insecure. I believe these rates are underestimated and the rates of Aboriginal families who are food insecure would actually be much higher than this data shows. This is compared with fewer than 1 in 20 people in the general population.

So how are programs that target healthy eating meant to be effective if people can’t even afford to buy food or can’t access it? Again, it’s going back to those bigger issues.

Q: How can Australia begin closing the gap on childhood obesity? 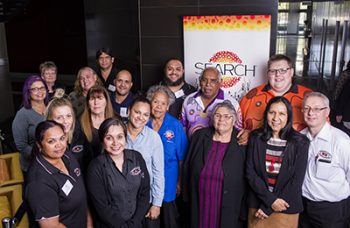 The Study of Environment on Aboriginal Resilience and Child Health (SEARCH) team.

Q: Why is it so important to have locally-informed, culturally appropriate programs?

A: There is evidence that programs led and delivered by Aboriginal communities lead to better health outcomes for their community. I think it’s so important to have Aboriginal people in leadership and key decision-making roles with a proper seat at the table within all of these systems. And it’s also important to ensure that local Aboriginal voices are heard and they are leaders and drivers of local programs.

If not, I think it’s impossible for government and non-Aboriginal service providers to deliver programs and policies that are going to have a positive impact on the health of our mob. To see real gains, we need all government policies and programs to value self-determination, and these systems need to decolonise for all Australians to be able to have good health.