“ In this election campaign, the major parties have together pledged more than $100 billion in new spending commitments, yet their policies targeted at addressing the extreme disadvantage faced by many of Australia’s First Peoples seem to amount to small change.

While Indigenous leaders have gratefully acknowledged these commitments, they are fairly modest when compared with the poverty, poor health and record levels of imprisonment of First Peoples.

Significantly, neither party has pledged to reverse the savage cuts of $534 million to Aboriginal programs made in the 2014 budget.”

Part 1 With the Federal Election on Saturday, AH&MRC have identified four priorities. 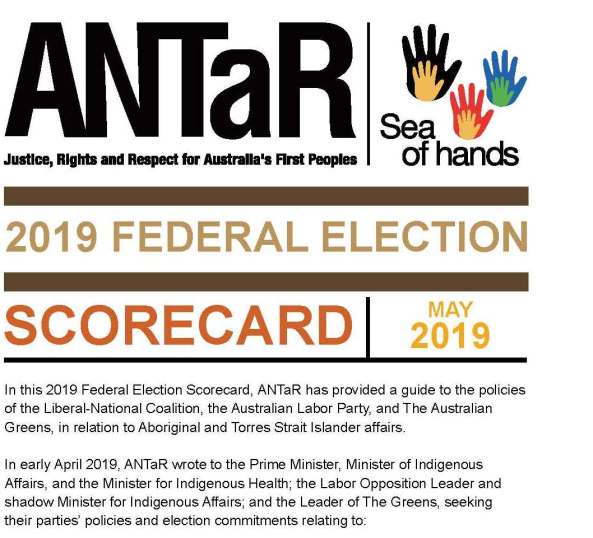 Part 3 In this 2019 Federal Election Scorecard, ANTaR has provided a guide to the policies of the Liberal-National Coalition, the Labor and Greens parties, in relation to Aboriginal and Torres Strait Islander Affairs.

Only Labor and the Greens have responded to our request, and these responses are available on our website in full at ANTAR WEBSITE

If the Coalition write to us in the last week of the Campaign, we’ll be sure to also post their response on the website.

Part 4  : There been no response from either party to the proposal to invest $100 million to build the capacity of 145 Aboriginal medical services. Continued from opening

For the record, Australia’s Aboriginal and Torres Strait Islander Peoples are among the most poverty-stricken Indigenous peoples in the world, and the nation’s most disadvantaged group. In terms of health and economic status, our people are doing far worse than Indigenous peoples in countries with similar histories, such as New Zealand and the United States.

While Aboriginal people live at least 10 years less than other Australians, and our infants die at twice the national rate, the major parties don’t seem to be responding to the recent alarming data showing that these gaps are still not on track.

Both major parties have largely disregarded the policy platform of the Close the Gap campaign, a coalition of 48 organisations, of which Oxfam is a founding member. There has been no response to the core proposal to invest $100 million to build the capacity of 140 Aboriginal medical services.

In the Liberal Party agenda, Indigenous affairs doesn’t even warrant a category among the 20 policy areas covered by “Our Plan”, whereas broadband does.

Retiring Indigenous Affairs Minister Nigel Scullion has put health policy announcements on his website that are not specifically aimed at Indigenous people. He mentions the listing of a skin cancer drug on the PBS at a cost of $81.5 million; the Rural Health Strategy, which includes $84.1 million for the Royal Flying Doctor Service; and, the $50 million National Women’s Health Strategy. This follows the Coalition’s lack of new Indigenous health measures in the budget.

This week, Labor released its Indigenous policy platform, “A Fair Go for First Nations People”, which does include some good policy such as the Voice to Parliament, the Makarrata Commission For Agreement Making And Truth Telling, the Resting Place for remains of First Peoples, and Regional Assemblies.

But in terms of polices that will improve the health and wellbeing of First Peoples, Labor could have done a lot more.

Labor’s health policy amounted to several measures that will cost just $115 million over four years. While this includes funding to address youth suicide and rheumatic heart disease, Labor should be more ambitious. Expanding Aboriginal medical services would be a good place to start.

Labor pledged $107 million to address the extremely high rates of incarceration of First Peoples, which are around 10 times that of other Australians, and even higher for women and children.

While we welcome the significant commitment to justice reinvestment and funding for Aboriginal legal services, what’s needed most is a commitment to work with the states to achieve law reform that will reduce the flow of Aboriginal people into the prison system.

There are some other good policies. We applaud Labor’s expansion of the Indigenous ranger program, the funding for 8,000 new educational places for young women, and the funding for 1300 apprenticeships.

But Labor’s pledge to continue work on the “third iteration of the implementation plan for the National Aboriginal and Torres Strait Islander Health Plan 2013-23” is ironic. This is the plan developed when Labor was last in government, which has never been funded, and there is no commitment to fund it into the future.

The lack of funding for the health plan, a core policy program that has absorbed a huge amount of effort on the part of Aboriginal leaders over many years, only reinforces perceptions that both sides of politics are lacking the bold vision needed to address our dire needs.