” When you think of Indigenous health, what is the first thing that comes to mind?

Is it the Closing the Gap campaign? The gap in life expectancy? Over-representation in the criminal justice system?

Or is the first thing that comes to mind that Aboriginal and Torres Strait Islander cultures are among the longest-surviving cultures in the world?

That mortality rates due to cardiovascular disease have dropped by 43 per cent since 1998?

Or that the prevalence of smoking has dropped by almost 10 per cent in the past decade?

It’s not too surprising if you didn’t think of the last three things — or if you didn’t even know these were true. Because this is not what we hear about in the media.

Think about the positive difference we could make by refocusing the conversation on strengths and success.”

Dr Katie Thurber works with the Mayi Kuwayu Study team as a Postdoctoral Fellow. Katie assists with study development and data analysis. She completed her PhD at NCEPH under the supervision of Professor Emily Banks and Associate Professor Ray Lovett.

Culture has long been considered a critical determinant of health for Aboriginal and Torres Strait Islander people. But we haven’t been able to prove in quantitative terms that strong culture is linked to better health, because we have lacked reliable measures of culture.

This led to the development of the Mayi Kuwayu study, which spent four years working with Aboriginal and Torres Strait Islander people across the country to develop measures of cultural participation and expression.

People are completing this survey right now, with the aim of providing large-scale quantitative evidence on how culture is linked to wellbeing

MKY invites you to complete this survey to help us understand how Aboriginal and Torres Strait Islander culture links to health and wellbeing.

They have worked with many Aboriginal and Torres Strait Islander people and communities to make this survey.

You can take the survey here: 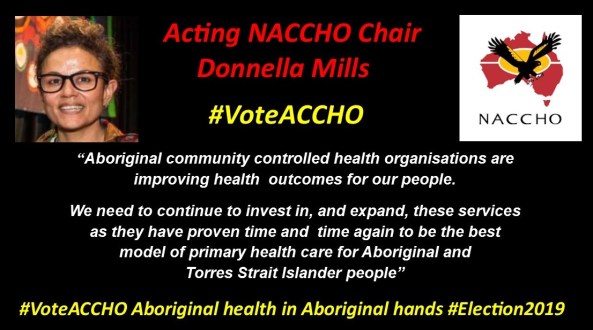 ” The health of Aboriginal and Torres Strait Islander peoples is not a partisan political issue and cannot be sidelined any longer.

NACCHO has developed a set of policy #Election2019 recommendations that if adopted, fully funded and implemented by the incoming Federal Government, will provide a pathway forward for improvements in our health outcomes.

We are calling on all political parties to include these recommendations in their election platforms and make a real commitment to improving the health of Aboriginal and Torres Strait Islander peoples and help us Close the Gap.

With your action and support of our #VoteACCHO campaign we can make the incoming Federal Government accountable. “

Part 1 Continued from opening :  Picture above : Culture is considered critical for Aboriginal and Torres Strait Islander people’s wellbeing. So how do we measure that? (ABC Kimberley: Ben Collins/file photo)

A study found that in Western Australia, three quarters of all media stories about Aboriginal and Torres Strait Islander peoples in 2012 were negative, focusing on topics such as alcohol use, child abuse, petrol sniffing, violence, and suicide.

Together this paints a pretty grim picture.

We call this constant negative portrayal of a population “deficit discourse” — and it can have a profound influence on how we view Aboriginal and Torres Strait Islander people.

These negative stories, and the focus on problems, can reinforce negative stereotypes about Aboriginal and Torres Strait Islander people, which can then contribute to racist attitudes and behaviours.

Aboriginal and Torres Strait Islander people who constantly hear these negative stories may internalise negative beliefs about their identity, which can contribute to low self-esteem and psychological distress.

It can also decrease people’s willingness to participate in health-promoting behaviours.

For example, in a study in the United States, African-American adults were shown one of a few different statements about colon cancer.

The key thing is that all of the statements were true, and based on the same data. The only thing that varied was how the statistic was framed.

Even more, the study found these participants were more likely to want to be screened for colon cancer themselves.

So a simple change in how the exact same data was framed resulted in different health action.

This constant deficit discourse can become a self-fulfilling prophecy. The act of continually talking about gaps and problems may actually serve to make things worse.

What should we do about this?

We need to acknowledge the potential effects of continuing to present such a negative (and unfair) portrayal of Australia’s First Peoples.

The ‘deficit discourse’ of Indigenous health

We also need to change things. This can start with changing the way we conduct research, and how we present findings in the media.

As consumers, we need to critique and question what we hear in the media. We need to be mindful of the way we discuss these issues, whether with our friends or on social media.

As a researcher, I consider I have an ethical obligation to avoid “deficit discourse”, given the potential health consequences.

So, within our research group, we try to do things a bit differently.

We follow two broad principles to focus our research on strengths, rather than on problems.

The first principle: we look at how things are going within the Aboriginal and Torres Strait Islander population.

This gives us the true story of what is going on, and it gives us real data we can feed back to communities.

We may compare this information with data from the non-Indigenous population where this is relevant, but this is always a lower priority.

Focusing on “the gap” only tells us the size of the space between two data points.

The size of “the gap” doesn’t tell us anything about how things are going for Aboriginal and Torres Strait Islander people, or for non-Indigenous people, for that matter.

The smoking gap, or why how we talk about statistics matters

I’ll give you an example of this using data about smoking prevalence, the percentage of the adult population that currently smokes daily.

Because 2.8 is bigger than 2.4, they concluded the gap in smoking had widened. This sounds like a bad news story, and it could have been interpreted to mean that tobacco control efforts were not working.

This didn’t line up with what we were hearing on the ground, so we looked at the data another way.

Instead of focusing on comparing the data with the non-Indigenous population, we looked within the Aboriginal and Torres Strait Islander population to estimate the change in smoking prevalence in absolute terms.

We found the prevalence of smoking had dropped by 9 per cent in the past decade, matching the progress in the non-Indigenous population, where there was a 7 per cent decrease.

What this means in terms of real lives is that there are 35,000 fewer Aboriginal and Torres Strait Islander adults smoking today, compared to if things had stayed the same. This will help avoid thousands of early deaths.

We saw particularly notable drops in smoking among younger people and those living in urban areas.

We learned that we need to redouble our tobacco control efforts for older age groups, and for those living in remote areas, building on what is working.

While both reports were accurate, they led to entirely different conclusions. The difference comes down to the way the statistics were framed.

We found there was a significant drop in smoking prevalence for both Aboriginal and Torres Strait Islander adults and for non-Indigenous adults — it was a good news story for both groups.

This good news is hidden when we focus on the comparison between the two groups.

The size of the “gap” isn’t telling us the whole story — and it may be hiding real progress that is occurring.

We learn much more by exploring how things are going within a population than we do by only looking at the difference between two populations.

The second principle: rather than only looking at risk factors, or things that cause disease, we try to explore factors that might promote health and wellbeing. These are called a few names, such as protective factors, health assets, health resources, or salutogenic factors.

Looking at protective factors can be tricky, because while we have a reasonably good idea of the types of things that cause disease — such as smoking, high body mass index, and alcohol use — we don’t have as good of a grasp on what promotes wellbeing.

So to do this, we explore things that Aboriginal and Torres Strait Islander people have told us is important to their wellbeing such as their culture, their family, and their environment.

These are concepts that we don’t usually measure in large-scale studies — often because these things are considered “too hard” to measure. But that doesn’t mean we shouldn’t try.

For example, culture has long been considered a critical determinant of health for Aboriginal and Torres Strait Islander people. But we haven’t been able to prove in quantitative terms that strong culture is linked to better health, because we have lacked reliable measures of culture.

This led to the development of the Mayi Kuwayu study, which spent four years working with Aboriginal and Torres Strait Islander people across the country to develop measures of cultural participation and expression.

People are completing this survey right now, with the aim of providing large-scale quantitative evidence on how culture is linked to wellbeing.

Identifying protective factors lets us design programs and policies that promote wellbeing, building on strengths that already exist within Indigenous families and communities. It’s an important complement to standard research that focuses on risk factors for disease.

I’ve explored these ideas in the context of Aboriginal and Torres Strait Islander health, but this is something we can do for all populations, all the time.

Think about the positive difference we could make by refocusing the conversation on strengths and success.