” Aboriginal and Torres Strait Islander children are 55 times more likely to die of rheumatic heart disease than other Australian children.

We’re seeking a commitment from all political parties to stop this preventable disease from ever taking the life of another child in Australia.”

Ms Pat Turner, CEO NACCHO Founding Member of END RHD speaking at #Laborconf18 this week on the need for urgent action to reduce the burden of rheumatic heart disease among Aboriginal and Torres Strait Islander people. Together we can

” A new report predicts rheumatic heart disease (RHD) will lead to over 500 preventable deaths and cost the Australian health system $317 million by 2031 if no further action to tackle the disease is taken.

The Cost of Inaction on Rheumatic Heart Disease – published by the END RHD Centre of Research Excellence (END RHD CRE), based at the Telethon Kids Institute – puts the number of people affected by RHD or its precursor, acute rheumatic fever, at over 4,500.”

Lead author Dr Rosemary Wyber said almost all of those predicted to develop acute rheumatic fever would be Aboriginal or Torres Strait Islander children and teenagers.

“Make no mistake about it – when we talk about the cost of inaction on rheumatic heart disease, we’re talking about the burden of disease for another generation of Aboriginal and Torres Strait Islander children and their communities,” Dr Wyber said.

The report also predicted that 1,370 people with the disease will need heart surgery and 563 will die with RHD.

“As a GP working in remote communities, I have seen first-hand the toll of RHD and the devastating impact it has on families and communities,” Dr Wyber said.

“This suffering is preventable. Deaths can be avoided, financial costs can be reduced, and new cases of disease prevented.”

RHD is caused by an abnormal reaction to the common Strep A infection. There is no cure for the disease, and people require an injection of long-acting penicillin every 21-28 days for at least a decade to stop it worsening. If people do not receive these injections, the disease can lead to heart failure or stroke.

“RHD should no longer exist in a country like Australia, yet our research predicts the human and economic toll will only continue to rise if we don’t see a significant increase in resourcing and investment in community-led models of care” Dr Wyber said.

“The social and environmental causes of RHD are linked to many other diseases of disparity, such as trachoma and otitis media. By addressing the causes, not only can we end RHD – we’ll significantly help close the gap.”

World renowned RHD expert and Director of the Telethon Kids Institute, Professor Jonathan Carapetis AM, said that in the past year there have been significant steps towards tackling RHD in Australia.

“In February, Minister Wyatt committed to the development of a roadmap; in May, Australia supported a World Health Assembly resolution to eliminate the disease globally; and in October, Minister Wyatt and Shadow Assistant Minister Snowdon made a bipartisan commitment to end RHD in this country” Professor Carapetis said. 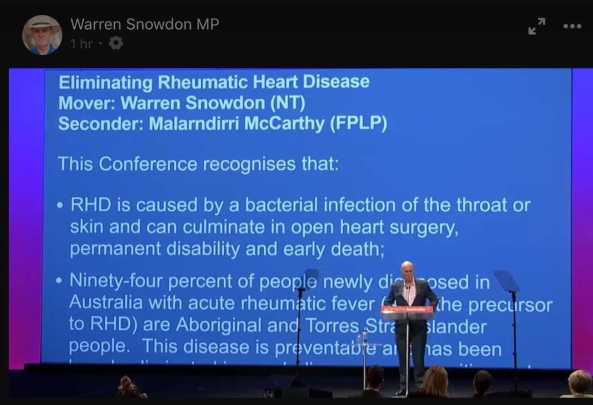 This morning I moved a resolution at #ALPConf18 to make Rheumatic heart disease a federal health priority. The motion was seconded by Senator Malarndirri McCarthy – Northern Territory and was unanimously supported by delegates.

Rheumatic heart disease is a disease of poverty that disproportionately affects some of our youngest and most vulnerable First Australians.

“So with a growing political will, strong Aboriginal and Torres Strait Islander leadership, and a solid evidence-base backed by 25 years of research, I believe it’s possible to change the trajectory outlined by this report. We all need to work together and action is urgently needed.”

The report looked at the four jurisdictions with the highest recorded burden of disease: Western Australia, South Australia, the Northern Territory, and Queensland.

Researchers used linked hospital admissions and mortality data over the last two decades to project cases likely to occur between mid-2016 and 2031.

The findings will inform part of the RHD Endgame Strategy, currently being developed by the END RHD CRE and due for release in 2020.

The report was led by the END RHD CRE, with data collected and analysed through the NHMRC Project Grant ‘Burden of rheumatic heart disease (RHD) and impact of prevention strategies: comprehensive evidence to drive the RHD Endgame’.