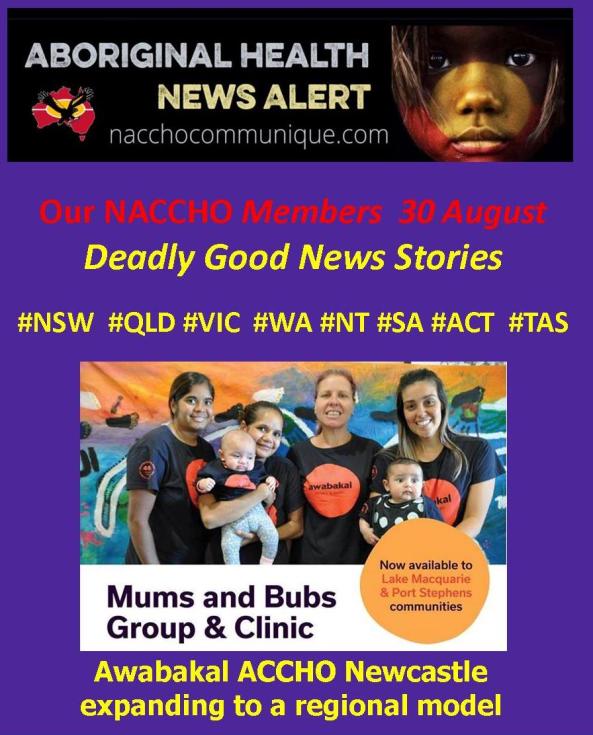 3.VIC : VACCHO  The Victorian Government is investing $8.4 million to boost the number of Aboriginal health workers in the system and provide more culturally appropriate mental health services for Aboriginal Victorians.

Note : Other states and Territories covered next week 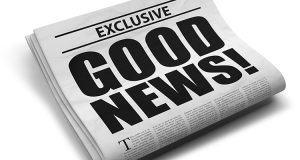 How to submit a NACCHO Affiliate  or Members Good News Story ?

Wednesday by 4.30 pm for publication each Thursday /Friday

Professor Ian Anderson, Deputy Secretary, Department of the Prime Minister and Cabinet, and Ms Andrea Mason, Co-chair of the Prime Ministers Indigenous Advisory Council, had the privilege of hosting a briefing session on the Closing the Gap Refresh at the Garma Festival Key Forum.

Held over four days in north-east Arnhem Land, Garma celebrates the local Yolngu people and their culture and is one of Australia’s most significant Indigenous events.

The gathering attracts over 2,500 people from all across the country and around the world and this year celebrated its 20th Anniversary

The festival’s Key Forum brings together people from all backgrounds, including business, community and political leaders, academics and journalists, students and educators as well as everyday Australians.

Ian spoke about the Closing the Gap refresh process so far, outlined the people and groups who have been consulted, the information that has been gathered and what the next steps are.

Andrea talked about her experience with the refresh process, how the Indigenous Advisory Council has been involved and reflected on some of the key issues raised by Aboriginal and Torres Strait Islander people.

A decade after Australian governments committed to the Closing the Gap framework, three of the seven national targets are on track and four will expire later this year.

This includes genuine partnership with Indigenous leaders, organisations and communities, to identify the priorities that will inform better programs and services, to close the gap.

A Special Gathering of prominent Indigenous Australians met in Canberra for two days in February this year to discuss priorities for the next decade of Closing the Gap. Participants from all states and territories met to share their experiences and help influence the next steps in Closing the Gap.

From this, ten representatives presented a statement to Council of Australian Governments (COAG) meeting who agreed all governments will undertake community consultations on the refresh, prior to agreeing on the new Closing the Gap framework, targets and performance indicators by 31 October 2018.

Around 1,000 people represented their communities, businesses and organisations at consultations around the country. We also asked people to share their views on the best way to refresh Closing the Gap on our website.

Feedback from consultations and submissions will now be used to inform the new Closing the Gap targets. 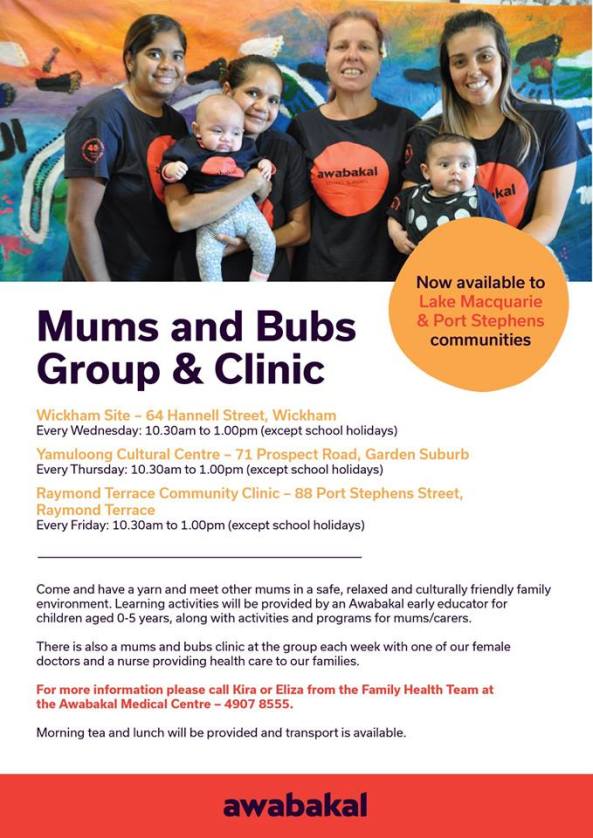 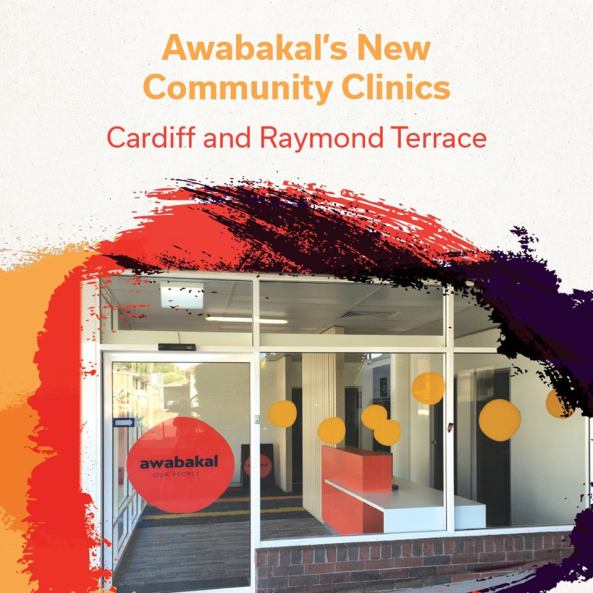 The new community clinics will complement the Awabakal Medical Service in Hamilton which will continue to operate as the primary location for giving Aboriginal families in the area access to primary health care, advocacy, social and emotional support. The existing service will also continue to offer more specialised health care and dental services.

As a result of extensive demographic research, Awabakal is taking action to provide comprehensive primary health care in the Cardiff and Raymond Terrace communities where high numbers of Aboriginal people reside and require accessibility to heath care. Because of this expansion, Awabakal has redesigned their model of care to integrate closely with other Awabakal services. 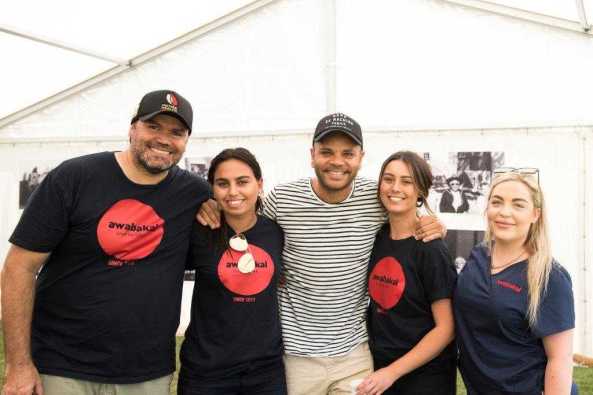 The new clinics will focus on co-locating Awabakal’s primary health care services with other services (such as aged care, NDIS, mental health, playgroup and mums and bubs groups), depending on the population need and demographics. This will see an expansion in the Awabakal team with the creation of more jobs in these regions and career progression for current staff.

This expansion signals the beginning of a growth phase of Awabakal as they plan to gradually expand their services to two other possible sites in the near future to help improve the health and wellbeing of Indigenous people in regions in need.

With more than 40 years behind them as an Aboriginal-managed not-for-profit organisation, Awabakal continues to set the standard for providing culturally appropriate health services to Indigenous people to help improve the health and wellbeing of the Aboriginal community. 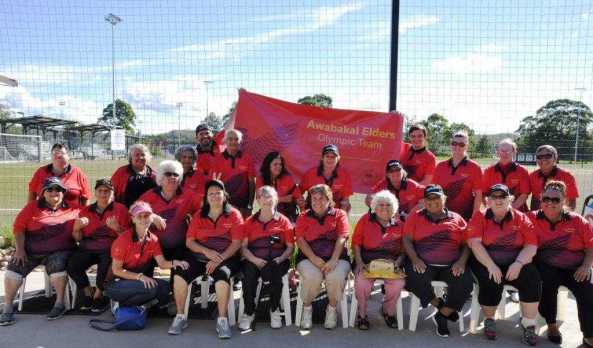 3.VIC : VACCHO  The Victorian Government is investing $8.4 million to boost the number of Aboriginal health workers in the system and provide more culturally appropriate mental health services for Aboriginal Victorians. 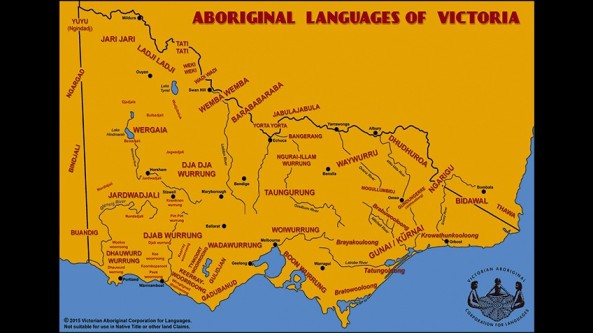 The new initiatives include an Aboriginal Mental Health Traineeship Program for Aboriginal people interested in a career in mental health services, and the provision of ten new clinical and therapeutic mental health positions in Aboriginal Community Controlled Organisations across Victoria.

As part of the program ten Aboriginal Victorians will be offered placements at eight mental health services while they undertake tertiary mental health studies.

The positions may include clinicians from a range of disciplines, such as mental health nurses, occupational therapists, psychologists and social workers, as determined by the needs of each organisation.

This funding is on top of the Labor Government’s $4 million investment in Aboriginal mental health demonstration projects in the Victorian Budget 2018-19.

“Historically Aboriginal people have had difficult experiences with the mental health system, so what we want to do is to break down barriers and build trust.”

“Everyone working in mental health should be considering how they can make things better for Aboriginal Victorians with mental illness, ensuring they receive culturally appropriate treatment, care and support.”

“Having Aboriginal health workers in the system will help achieve this and foster cross-cultural understanding.”

“These initiatives, which are important in helping the mental health, social and emotional well-being of Aboriginal Victorians, also break down barriers and help strengthen the relationship with local health services.”

The Territory Labor Government is on track to deliver on all 219 recommendations of the Riley Review with 50 now completed since February and work well underway on implementing the remaining recommendations.

Some of the key recommendations completed to date include:

The past six months have seen a new level of engagement take place, including:

· Meetings with 129 unique organisations;
· Over 250 separate meetings including 693 individuals;
· Established 6 key working groups and they are, the Industry Reference group, Small Bars and restaurants, Liquor Act Re-Write group, Data & Evaluation group, Alcohol on the Water group and Liquor Stores, and;
· 11 editions of the eNewsletter delivered to over 700 local key stakeholder

The BDR Evaluation covers the first 6 months of operation and was conducted independently by Menzies School of Health Research and released in June 2018.

The Territory Labor Government promised to bring back the BDR after it was scrapped by a chaotic CLP government.

The BDR is just one of the suite of tools this government has implemented to tackle alcohol fuelled violence and crime, and the Territory Labor Government will adopt recommendations within the evaluation report to further strengthen the BDR.

Since commencement, a total of 6,120 persons have been placed on the BDR and as of 31 July, there were 3,526 people on the register.

All recommendations have been supported or supported in principle.

The next evaluation of the BDR will cover the first 12 months of operations and will be reported in December 2018.

Territorians have a right to live in safe communities, and that’s why the Territory Labor Government has undertaken the most comprehensive alcohol reforms in the NT’s history.
Tackling alcohol abuse and the crime and harms it causes remains the biggest social issue in the Territory. We continue to have unacceptable rates of alcohol related crime and anti-social behaviour, and this is our response to tackle this issue in an evidence-based and co-ordinated approach.

From our new auxiliary liquor inspectors monitoring our bottle shops, more police officers on the beat with stronger powers and better resources, to strengthening our liquor legislation – we are putting everything in to tackling alcohol dysfunction, to create generational change for the Northern Territory.

The 6 month evaluation report contained a number of recommendations but also showed that the BDR is meeting its policy objectives.

The BDR is an important part of our plan to limit the supply of alcohol to problem drinkers. It’s one of the ways we are tackling alcohol fuelled violence and crime.

The Territory Labor Government will continue to evolve and improve the BDR based on evidence, and this evaluation response provides that pathway forward.

Link to progress update report of the 219 recommendations of the Riley Review:
https://alcoholreform.nt.gov.au/__data/assets/pdf_file/0019/564211/NTG_Table_2018_AUG_ART.pdf

Link to the Territory Labor Government’s response of the independent 6 month evaluation of the BDR:
https://alcoholreform.nt.gov.au/__data/assets/pdf_file/0006/564207/Response-to-BDR-Evaluation-Report_WEB.pdf 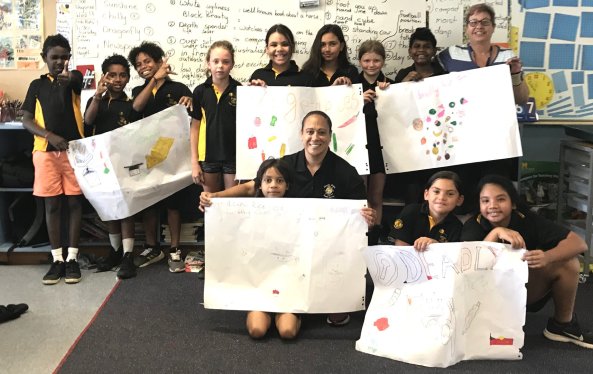 Great work by our Deadly Choices team delivering education on Nutrition at Moulden Primary school today. The kids drew the 5 fruit groups, then presented to each other what food group they had.#DeadlyChoices

The IUIH System of Care Conference was aimed at providing education and skills to General Practitioners about a systematised way of providing high quality health care to Indigenous people in order to Close the Gap. 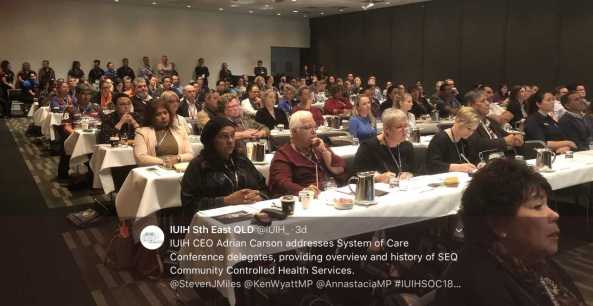 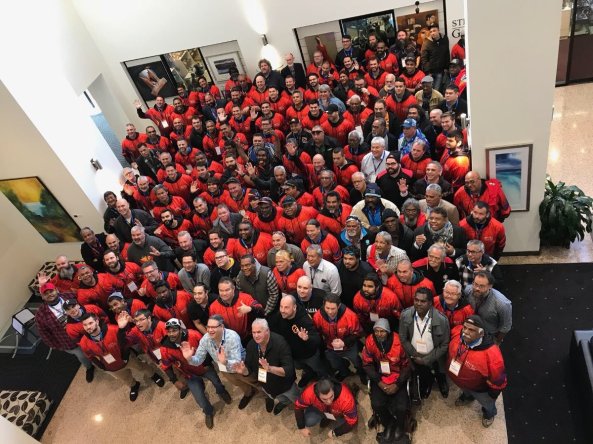 All too often Aboriginal male health is approached negatively, with programs only aimed at males as perpetrators,’ the National Aboriginal Community Controlled Organisation (NACCHO) website states.

By contrast, Ochre Day – which runs over 27–28 August – is intended to celebrate Aboriginal and Torres Strait Islander masculinities and resilience.

‘[We focus on] respect for our laws, respect for Elders, culture and traditions, responsibility as leaders and men, teachers of young males, holders of lore, providers, warriors and protectors of our families, women, old people, and children,’ the website states.

Ochre Day originated in 2012, when Cape York Aboriginal and Torres Strait Islander male health worker Dan Fischer decided to focus on positive approaches to men’s health in his community, aiming to prevent a problem rather than try to solve it after the fact. 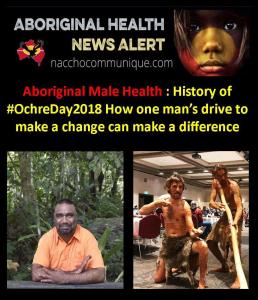 Many communities around Australia have since founded their own men’s groups.

At the Ochre Day welcome ceremony, Federal Minister for Indigenous Health Ken Wyatt – who is of Noongar, Yamatji and Wongi descent – told the Ochre Day National Men’s Health Conference in Hobart that transforming health for Aboriginal and Torres Strait Islander men is possible.

‘If we are to truly transform the health status of our First Australians, we need every Aboriginal and Torres Strait Islander man to take responsibility and be proud of themselves and their heritage – proud of the oldest continuous culture on Earth, and the traditions that kept us healthy, from the very beginning,’ he said.

‘[O]ur fathers, grandfathers and uncles — as well as our mothers, aunties and grandmothers — must play a key role in protecting our children. Our men, in particular, must be warriors for our children’s welfare and future, every day.’

In the speech, Minister Wyatt also announced the beginning of a 10 year National Male Health Strategy, beginning in 2020.