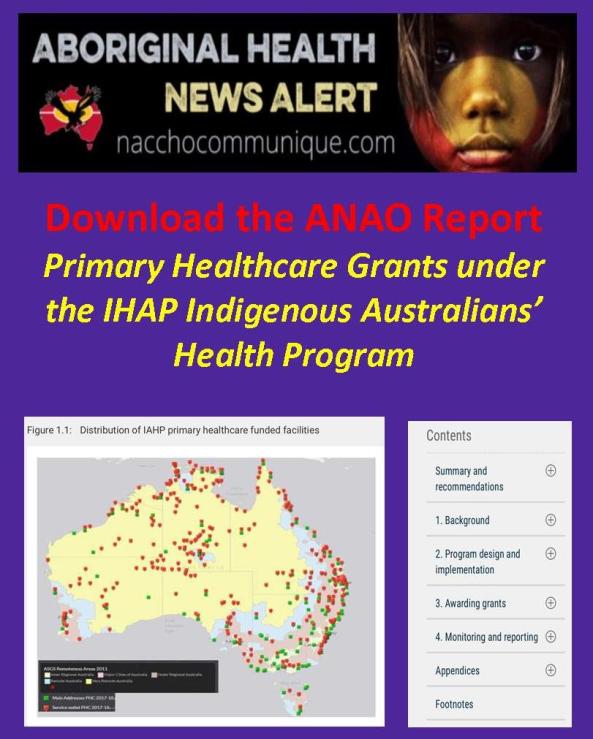 ” The bulk of IAHP expenditure is via grants. Since 2015, IAHP primary healthcare grants totalling approximately $1.44 billion have been awarded with 85 per cent of this funding going to Aboriginal Community Controlled Health Organisations.

The audit objective was to assess the effectiveness of the Department of Health’s design, implementation and administration of primary healthcare grants under the IAHP.”

1. The Indigenous Australians’ Health Program (IAHP) was established in 2014 through the consolidation of four existing Indigenous health funding streams administered by the Department of Health (the department).

Primary healthcare services are usually the ‘entry point’ for persons into the broader health system and can be contrasted to services provided through hospitals or when people are referred to specialists.

2. The bulk of IAHP expenditure is via grants. Since 2015, IAHP primary healthcare grants totalling approximately $1.44 billion have been awarded with 85 per cent of this funding going to Aboriginal Community Controlled Health Organisations.

Rationale for undertaking the audit

4. The IAHP was selected for audit because it is intended to contribute towards achieving the Indigenous health-related ‘Closing the Gap’ targets regarding life expectancy and infant mortality. The program represents the Australian Government’s largest direct expenditure on Indigenous primary healthcare.

5. The audit objective was to assess the effectiveness of the Department of Health’s design, implementation and administration of primary healthcare grants under the IAHP.

6. To form a conclusion against this objective, the ANAO adopted the following high-level criteria:

7. The department’s design and implementation of the primary healthcare component of the IAHP was partially effective as it has not yet achieved all of the Australian Government’s objectives in establishing the program. The department has not implemented the planned funding allocation model and there are shortcomings in performance monitoring and reporting arrangements. However, the department has consolidated the program, supported it through coordination and information-sharing activities and continued grant funding.

8. The Government’s original objectives in establishing the IAHP are due to be fully achieved in 2019–20, four years later than originally planned. The majority of IAHP primary healthcare grant funding to date has been allocated in essentially the same manner as previous arrangements rather than the originally intended needs based model. Program implementation has been supported through appropriately aligning funding streams to intended outcomes and coordination and information-sharing with relevant stakeholders.

9. Most aspects of the department’s assessment of IAHP primary healthcare funding applications and negotiation of funding agreements were consistent with the Commonwealth Grants Rules and Guidelines (CGRGs). The exception to this was the poor assessment of value for money regarding the majority of grant funds. The grant funding agreements were fit for purpose, but the department has not established service-related performance benchmarks for funded organisations that were provided for in most of the agreements.

10. The department has not developed a performance framework for the Indigenous Australians’ Health Program. Extensive public reporting on Indigenous health provides a high level of transparency on the extent to which the Australian Government’s objectives in Indigenous health are being achieved. However, this reporting includes organisations not funded under the IAHP and, as such, it is not specific enough to measure the extent to which IAHP funded services are contributing to achieving program outcomes.

12. The design of the IAHP was consistent with the Government’s objectives of achieving budget savings and reducing administrative complexity through consolidation of existing grant programs. The objective of allocating primary healthcare grant funding on a more transparent needs basis will not be achieved until 2019–20, four years behind the timetable agreed by Government in establishing the IAHP.

13. Three outcomes were established for the program and set out in published IAHP grant guidelines. One of the outcomes does not clearly identify the desired end result. IAHP funding, including the primary healthcare component, are appropriately aligned to the outcomes.

14. The department uses a wide variety of forums and networks to share information and seek feedback about its current and planned Indigenous health activities, including the IAHP. Some coordination and joint planning activities relating to primary healthcare have also been undertaken through the Aboriginal Health Partnership Forums.

15. Ninety eight per cent of IAHP primary healthcare grant funding has been provided through non-competitive processes. The department obtained Ministerial agreement for these processes.

16. Most aspects of the assessment of funding proposals were undertaken consistently with the CGRGs and IAHP guidelines. The exception was assessment of value for money. Assessment records for some funding rounds, including the $1.23 billion ‘bulk’ round undertaken in 2015, lacked evidence of substantive analysis of value of money considerations. The department was also unable to provide evidence it had undertaken a value for money assessment regarding the $114 million grant to the Northern Territory Government. In virtually all cases, risk assessments formed part of the assessment process.

17. Departmental delegates were provided with sufficient advice to enable them to discharge their obligations under the Public Governance, Performance and Accountability Act 2014 in approving IAHP grant proposals. The timeliness of the advice varied, but was provided relatively quickly for the larger 2015 funding rounds.

18. Funding agreements are fit for purpose, using a grant head agreement and an IAHP-specific schedule. The specific services to be provided by each funded organisation are set out in separate Action Plans, which are appropriately referenced in the agreement schedule. The agreements with Aboriginal Community Controlled Health Organisations allow for the setting of individual performance targets, but no targets have been set. All agreements also clearly set out reporting requirements.

19. The department has not established a performance framework for the primary healthcare component of the IAHP.

20. Systems are in place to collect performance data, but systems to collect quantitative performance data have not been effective. Several changes to data collection processes have resulted in an increased reporting burden on IAHP grant recipients and two six-monthly data collections being discarded or uncollected. These breaks in the data series limit its usefulness for longitudinal analysis of performance trends. The department has commenced projects to improve the quality of data, but has limited assurance over the quality of data collected before 2017 as it has not been validated.

21. The department relies on public reporting of a range of Indigenous health indicators to monitor achievement of program outcomes. The reporting includes data about services not funded under the IAHP. As such, it is not specific enough to measure the extent to which IAHP funded services are contributing to achieving program outcomes. The department was also unable to demonstrate how it used the data to inform relevant policy advice and program administration.

The Department of Health improve the quality of IAHP primary healthcare value for money assessments, including ensuring their consistency with the new funding allocation model.

The Department of Health ensure that new IAHP funding agreements for primary healthcare services include measurable performance targets that are aligned with program outcomes and that it monitors grant recipient performance against these targets.

23. The Department of Health (‘the Department’) notes the findings of the report and agrees with the recommendations.

It is pleasing that the report finds: the program has been consolidated and supported through coordination and information sharing activities; programme implementation has appropriately aligned funding streams to intended outcomes; and the objective of reducing administrative complexity has been achieved.

Work is already underway within the Department which aligns with the report’s recommendations, and the report provides a platform to continue these efforts. In particular, the Department has introduced more robust assessment processes for primary health care grants under the Indigenous Australians’ Health Programme and has also commenced development of enhanced performance measurements of program outcomes, supported by an outcomes-focussed policy framework. The Department’s responses to the individual recommendations provide further detail.

The report identifies that the introduction of a new funding allocation model for the distribution of primary health care funding as announced in the 2014–15 Budget is yet to be completed and finds that this deferral has contributed to a partially effective implementation of the Australian Government’s objectives in establishing the programme. The Government announced in the 2018–19 Budget that the model will be implemented from 1 July 2019 and the Department will continue to work closely with Aboriginal Community Controlled Health Services to deliver this important initiative. The Department notes that this deferral occurred in the context of extensive stakeholder engagement together with significant data improvement activities designed to support a robust and well-developed funding model.

Whilst the Department is committed to continuous improvement of the administration of the Indigenous Australians’ Health Programme, the Department wishes to acknowledge and recognise the significant contribution our network of Aboriginal Community Controlled Health Services are making to improve the health of their communities under the Australian Government’s Closing the Gap agenda

1.6 In the May 2014 Budget, the Australian Government announced the establishment of the Indigenous Australians’ Health Programme (IAHP). It was formed by consolidating four existing funding streams administered by the department, which between them included around 30 discrete funding components.8 The consolidation was intended to reduce administrative complexity and enable an improved focus on basic health needs (including clinical primary healthcare) at a local level to improve health outcomes. The stated high-level objective for the IAHP is:

1.8 With the exception of ‘social and emotional wellbeing’ activities being transferred to the Department of Prime Minister and Cabinet9, the range of activities funded by the department under IAHP are broadly similar to those under the pre-IAHP arrangements and funding levels have increased. In 2013–14, funding under predecessor grant programs was $682.3 million (excluding social and emotional wellbeing activities). The budget allocation for IAHP funding in 2017–18 is $856.1 million.

1.9 The bulk of IAHP expenditure is via grants. As at March 2018, $743.5 million of 2017–18 grant funds had been expended or committed.10 The largest component is grants to provide primary healthcare services to Indigenous Australians, which account for $461.5 million (62 per cent) of total IAHP 2017–18 expended and committed grant funding.11 Other significant grant funding areas under the IAHP relate to activities intended to increase Indigenous Australians’ access to mainstream services12 ($108 million, or 15 per cent) and funding for various maternal/early childhood health and anti-smoking activities (about five per cent each).

1.11 The geographical distribution of the healthcare facilities receiving IAHP primary healthcare funding is shown in Figure 1.1.

1.12 The 2017–18 primary healthcare grant funding amounts according to jurisdiction and remoteness index is shown in Table 1.1.