On Monday night Four Corners investigates the power of Big Sugar and its influence on public policy.

“How did the entire world get this fat, this fast? Did everyone just become a bunch of gluttons and sloths?”  Doctor

The figures are startling. Today, 60% of Australian adults are classified as overweight or obese. By 2025 that figure is expected to rise to 80%.

“It’s the stuff of despair. Personally, when I see some of these young people, it’s almost hard to imagine that we’ve got to this point.”  Surgeon

Many point the finger at sugar – which we’re consuming in enormous amounts – and the food and drink industry that makes and sells the products fuelled by it.

Tipping the scales, reported by Michael Brissenden and presented by Sarah Ferguson, goes to air on Monday 30th of April at 8.30pm. It is replayed on Tuesday 1st of May at 1.00pm and Wednesday 2nd at 11.20pm.

It can also be seen on ABC NEWS channel on Saturday at 8.10pm AEST, ABC iview and at abc.net.au/4corners.

“Amata was an alcohol-free community, but some years earlier its population of just under 400 people had been consuming 40,000 litres of soft drink annually.

The thing that I say in community meetings all the time is that, the reason we’re doing this is so that the young children now do not end up going down the same track of diabetes, kidney failure, dialysis machines and early death, which is the track that many, many people out here are on now,”

“This isn’t about, as the food industry put it, people making their own choices and therefore determining what their weight will be. It is not as simple as that, and the science is very clear.” Surgeon

Despite doctors’ calls for urgent action, there’s been fierce resistance by the industry to measures aimed at changing what we eat and drink, like the proposed introduction of a sugar tax.

“We know about the health impact, but there’s something that’s restricting us, and it’s industry.”  Public health advocate

On Monday night Four Corners investigates the power of Big Sugar and its influence on public policy.

“The reality is that industry is, by and large, making most of the policy. Public health is brought in, so that we can have the least worse solution.”  Public health advocate

From its role in shutting down debate about a possible sugar tax to its involvement in the controversial health star rating system, the industry has been remarkably successful in getting its way.

“We are encouraged by the government here in Australia, and indeed the opposition here in Australia, who continue to look to the evidence base and continue to reject this type of tax as some sort of silver bullet or whatnot to solve what is a really complex problem, and that is our nation’s collective expanding waistline.” Industry spokesperson

We reveal the tactics employed by the industry and the access it enjoys at a time when health professionals say we are in a national obesity crisis.

NACCHO post – Sixty-three per cent of Australian adults and 27 per cent of our children are overweight or obese.

“This is not surprising when you look at our environment – our kids are bombarded with advertising for junk food, high-sugar drinks are cheaper than water, and sugar and saturated fat are hiding in so-called ‘healthy’ foods. Making a healthy choice has never been more difficult.

The annual cost of overweight and obesity in Australia in 2011-12 was estimated to be $8.6 billion in direct and indirect costs such as GP services, hospital care, absenteeism and government subsidies.1 “

” This campaign is straightforward – sugary drinks are no good for our health. It’s calling on people to drink water instead of sugary drinks.’

Aboriginal and Torres Strait Islander people in Cape York experience a disproportionate burden of chronic disease compared to other Australians.’

Water is the best drink for everyone – it doesn’t have any sugar and keeps our bodies healthy.’ 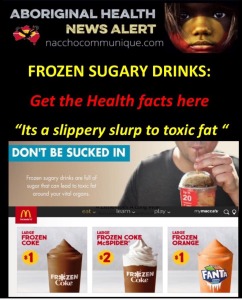 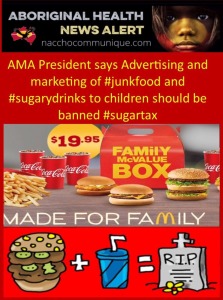 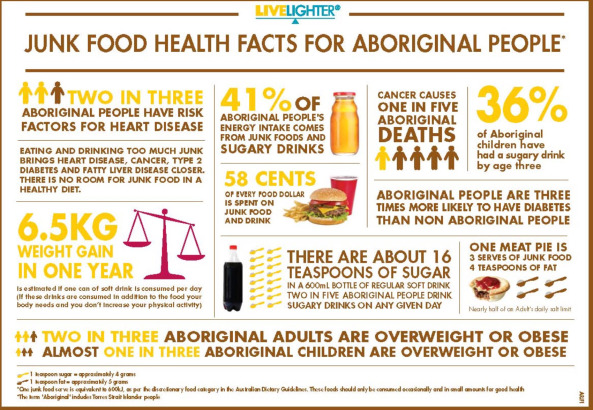