Aboriginal health leaders Olga Havnen , James Ward and Pat Turner who have experience or specialisation in child protection, who have evidence based opinions, who agree child safety is paramount & priority & who understand the complexities of child protection

‘What we need is intelligent, informed discussion and looking for solutions rather than the confected outrage and anger’ – Olga Havnen, Dilba Health Service CEO, @sunriseon7 this morning.

Watch the full Sunrise interview here : We have the solutions

The Sunrise studios in Sydney have been swamped by protesters furious over the program’s segment on Aboriginal adoption earlier this week.

“We know the conversation around Aboriginal children and their removal sparked concern and protests last week,” Kochie said. “So we’re responding to calls by the Aboriginal community to look at the issue with the experts.”

“There’s absolutely no prohibition or restriction on the ability of non-Aboriginal people to care for children,” she said. “Either as foster carers or in permanent adoption.”As the panel wrapped up, Kochie suggested the experts and Sunrise work together to inform Australians about how the childhood protection system could be improved.

“[Let’s] get some of those changes through,” he said. “It is a real issue affecting the Indigenous community right across the country.”

Ms Havnen then gave Sunrise one last gentle whack on the head.

“What we need is intelligent, informed discussion and looking for solutions rather than the confected outrage and anger,” she said.

Last week, Samantha Armytage took to social media to claim media coverage of the controversial panel was “hysterical”. However, on Tuesday she struck a much more cheerful note.

“Informative, productive chat,” she tweeted. “Thanks to our panel today. We look forward to having you on the show often.” 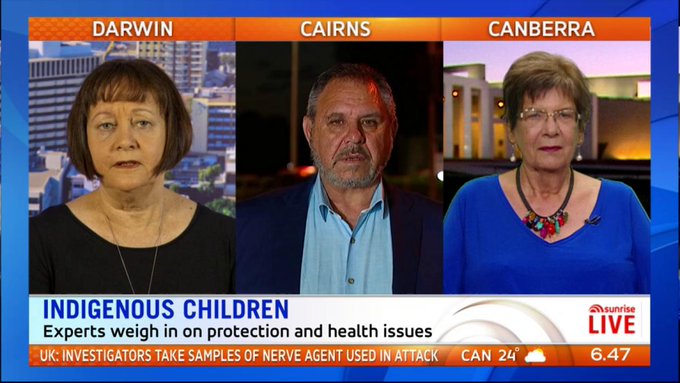 This morning we held a special edition of Hot Topics, taking a closer look at the issue of child protection, particularly in Indigenous communities.

Three panellists who are experts in their field joined us to discuss.

Sunrise sparked protests last week after one of its panellists suggested there should be a second stolen generation.

The breakfast show was also forced to pull down the controversial segment from social media after using footage without permission.