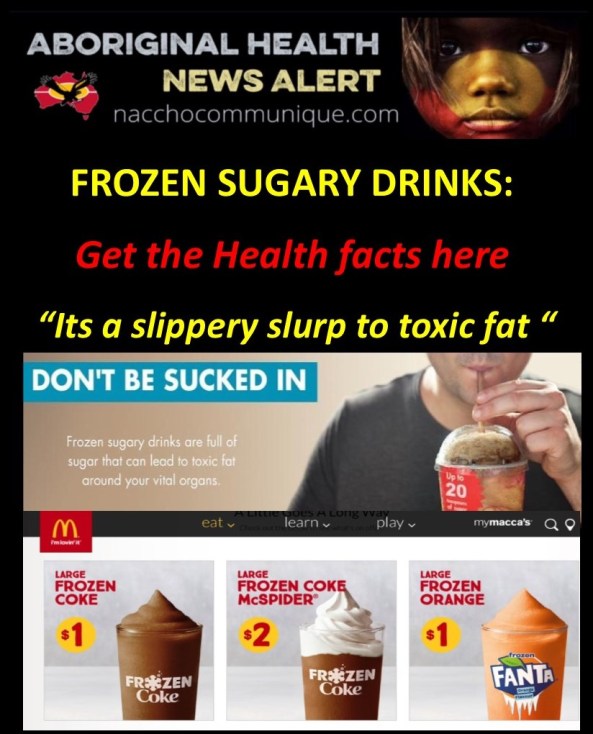 “A cheeky, graphic counter-campaign taking on cheap frozen drink promotions like $1 Slurpees and Frozen Cokes has hit Victorian bus and tram stops to urge Australians to rethink their sugary drink.

Rather than tempt viewers with a frosty, frozen drink, the “Don’t Be Sucked In” campaign from LiveLighter and Rethink Sugary Drink, an alliance of 18 leading health agencies, shows a person sipping on a large cup of bulging toxic fat. “ 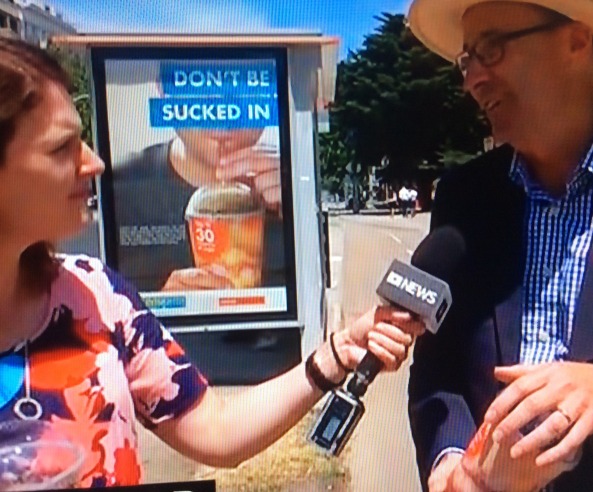 NACCHO has published over 150 various articles about sugar , obesity etc

Craig Sinclair, Chair of Cancer Council Australia’s Public Health Committee, said while this graphic advertisement isn’t easy to look at, it clearly illustrates the risks of drinking too many sugary drinks.

“A mega $3 Slurpee contains more than 20 teaspoons of sugar.

That’s the same amount of sugar as nearly eight lemonade icy poles, and more than three times the maximum recommended by the World Health Organisation of six teaspoons a dayi.”

“At this time of year it’s almost impossible to escape the enormous amount of advertising and promotions for frozen drink specials on TV, social media and public transport,” Mr Sinclair said. 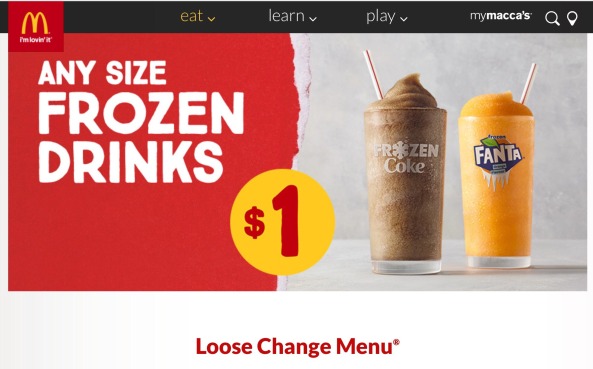 “These cheap frozen drinks might seem refreshing on a hot day, but we want people to realise they could easily be sucking down an entire week’s worth of sugar in a single sitting.”

A large frozen drink from most outlets costs just $1 – a deal that major outlets like 7-Eleven, McDonald’s, Hungry Jacks and KFC promote heavily.

“This summer, Aussies could be slurping their way towards weight gain, obesity and toxic fat, increasing their risk of 13 types of cancer, type 2 diabetes, heart and kidney disease, stroke and tooth decay,” Ms McAleese said.

“When nearly two thirds of Aussie adults and a third of kids are overweight or obese, it’s completely irresponsible for these companies to be actively promoting excessive consumption of drinks completely overloaded with sugar.

“And while this campaign focuses on the weight-related health risks, we can’t ignore the fact that sugary drinks are also a leading cause of tooth decay in Australia, with nearly half of children aged 2– 16 drinking soft drink every day.ii

“We’re hoping once people realise just how unhealthy these frozen drinks are, they consider looking to other options to cool off.

“Water is ideal, but even one lemonade icy pole, with 2.7tsp of sugar, is a far better option than a Slurpee or Frozen Coke.”

Mr Sinclair said a health levy on sugary drinks is one of the policy tools needed to help address the growing impact of weight and diet-related health problems in Australia.

“Not only can a 20% health levy help deter people from these cheap and very unhealthy drinks, it will help recover some of the significant costs associated with obesity and the increasing burden this puts on our public health care system,” he said.

This advertising will hit bus and tram stops around Victoria this week and will run for two weeks. #

About LiveLighter: LiveLighter® is a public health education campaign encouraging Australian adults to lead healthier lives by changing what they eat and drink, and being more active.