In 2017, around 373,000 Australian males (3.1%) identified as Aboriginal and/or Torres Strait Islander [1, 2]. Indigenous males tend to be younger than non-Indigenous males (34% aged less than 15, compared with 19% of non-Indigenous males), they are culturally diverse (17% speak an Indigenous language and 61% identify with a clan, tribal or language group) and they are outnumbered by females in later life (85 males for every 100 females aged 65 or over) [2, 3].

NACCHO has long recognised the importance of an Aboriginal male health policy and program to close the gap by 2030 on the alarming Aboriginal male mortality rates across Australia.

Aboriginal males have arguably the worst health outcomes of any population group in Australia.

To address the real social and emotional needs of males in our communities, NACCHO proposes a positive approach to Aboriginal male health and wellbeing

NACCHO, its affiliates and members are committed to building upon past innovations and we require targeted actions and investments to implement a wide range of Aboriginal male health and wellbeing programs and strategies.

We call on State, Territory and Federal governments to commit to a specific, substantial and sustainable funding allocation for the NACCHO Aboriginal Male Health 10 point Blueprint 2013-2030

Who are Australia’s males?

Males are a diverse population, with differing health behaviours, conditions and health service use across a range of characteristics. The characteristics of five particular population groups are described below.

From the 2011 ABS census, 69% of the Australian male population live in Major cities, 19% live in Inner regional areas, 9.3% live in Outer regional areas, and 2.5 per cent live in Remote and Very remote areas [4]. Males living in Remote and Very remote areas outnumber females (116 males for every 100 females) and are community-minded (19% volunteer for a group or organisation, compared with 14% of males living in Major cities)[4].

Some Australian males are more disadvantaged than others. Thirteen per cent of males are experiencing poverty and around 59,000 are homeless [5, 6]. There are nearly 36,000 Australian male prisoners in adult corrective services custody [7]. Two out of three (66%) males aged 15 and over are employed and 60% of 15–74 year old males have a non-school qualification [8, 9].

More than a quarter (27%) of the Australian male population were born overseas. Of those born overseas, the majority were born in the United Kingdom (followed by New Zealand and China), and overseas-born males are outnumbered by overseas-born females (98 males for every 100 females) [10].

The lifestyles males lead can influence how healthy they are in the short and long term. A lifestyle including exercise, a well-balanced diet, and maintaining a healthy body weight, may reduce the risk of poor health. Risk factors such as smoking tobacco, misusing alcohol and illicit substance use, or exposure to violence, may increase the likelihood of poor health.

Regular physical activity helps maintain a healthy body weight and reduce the risk of many chronic conditions and injuries. Sport and other forms of physical activity can also improve mental wellbeing and may foster social networks which provide support and opportunities for development. 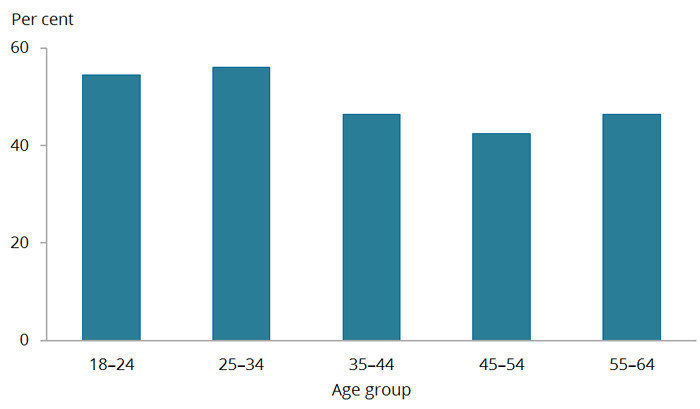 Note: “Sufficiently active” here refers to having completed at least 150 minutes of physical activity over 5 or more sessions in the previous week.

7 in 10 Australian men are overweight or obese While excess weight is commonly managed using dietary intervention and exercise, for those who are morbidly obese or who are obese and have other conditions related to their excess weight, weight loss surgery may be appropriate.

Weight loss surgery (bariatric surgery) is surgery that aims to help obese patients lose weight and lower the risk of medical problems associated with obesity. It restricts the amount of food a recipient can eat or alters the process of food digestion so that fewer calories are absorbed.

Tobacco smoking is the single most preventable cause of poor health and death in Australia [5]. The main data sources reporting on tobacco smoking in Australia are the ABS National Health Survey’s (NHS), the National Australian Aboriginal and Torres Strait Islander Social Survey, and the AIHW National Drug Strategy Household Survey (NDSHS).

These surveys showed that:

The proportion of males who smoke tobacco differs by age and between population groups [1, 3, 7]:

Excessive alcohol consumption is a major risk factor for a variety of health problems, including liver and heart conditions, and poor mental health. It also contributes to accident and injury, such as motor vehicle accidents, physical violence and homicide. The main data sources reporting on alcohol consumption in Australia are the AIHW National Drug Strategy Household Survey and the ABS National Health Survey. Although these surveys use different methodologies, they show similar results.

Based on the ABS NHS, in 2014–15, more than half of men aged 18 and over (57%) were exceeding the single occasion risk threshold, and one in four (26%) exceeded the lifetime risk guideline. The rates of lifetime and single occasion risky drinking vary by age-group (see Figure 3) [1]. 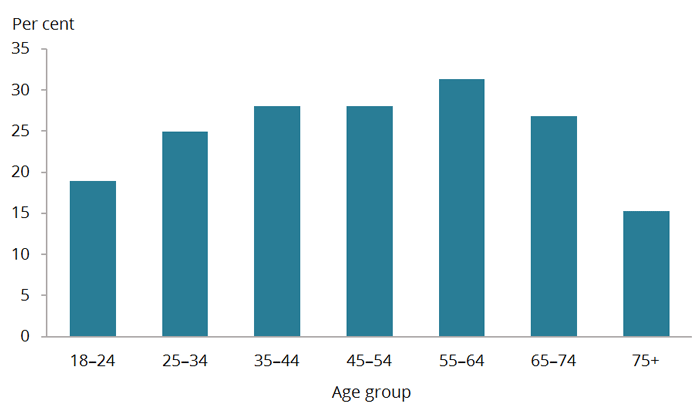 Note: Alcohol consumption risk levels based on 2009 National Health and Medical Research Council (NHMRC) guidelines for the consumption of alcohol.

The proportion of men who exceed the lifetime alcohol risk guidelines varies by age and between population groups [1, 2, 3]:

Illicit substance use includes the use of illegal drugs (such as cannabis and heroin), or inappropriate use of prescription pharmaceuticals (such as sleeping pills) or other substances (such as naturally occurring hallucinogens). Illicit use of drugs causes death and disability and is a risk factor for many diseases. The effects of illicit drug use can be severe, for example leading to poisoning, heart damage, mental illness, self-harm, suicide and death. Illicit drug use is also associated with risks to users’ families and friends and to the community. It contributes to social and family disruptions, violence, and crime and community safety issues. The AIHW National Drug Strategy Household Survey reports on illicit drug use in Australia.

The pattern of illicit substance use differs by age groups—32% of men aged 20–29 had recently used illicit drugs, compared with 7.9% of men aged 60 or over.

Violence is the intentional threat or actual use of physical force or power against oneself, another person, or a group, that results in injury, death, psychological harm, abnormal growth or deprivation. The main data source for violence is the ABS Personal Safety Survey.

Australian men have experienced violence since they turned 15

How healthy are Australia’s males?

A person’s health status is their overall level of health, and can be measured through self-assessed health status; presence of chronic disease and comorbidities; mental health; sexual heath; life expectancy; and level of disability.

Australian males rated their health as excellent or very good

Self-reported data from the Australian Bureau of Statistics (ABS) 2014–15 National Health Survey (NHS) provides an estimate of the prevalence of chronic disease among the Australian population. Chronic disease data is collected for arthritis, asthma, back problems, cancer, COPD (chronic obstructive pulmonary disease), CVD (cardiovascular disease), diabetes, and mental health conditions. These chronic diseases were selected for reporting because they are common, pose significant health problems, have been the focus of recent AIHW surveillance efforts, and action can be taken to prevent their occurrence. This survey data is self-reported and is therefore likely to under-report the true prevalence of chronic disease. However, using this data enables us to look at the comorbidity of chronic diseases across the Australian population, which is not possible using separate data sources. For more information on data quality see Data sources.

1 in 2 Australian males have a chronic disease

In 2014–15, 48% of males reported having one or more of the 8 selected chronic diseases (arthritis, asthma, back problems, cancer, cardiovascular disease, COPD, diabetes and mental and behavioural problems) [1].

The prevalence of these chronic diseases varies with age:

Cancer describes a diverse group of several hundred diseases in which some of the body’s cells become abnormal and begin to multiply out of control. Some cancers are easily diagnosed and treated, others are harder to diagnose and treat, and all can be fatal. Cancers are named by the type of cell involved or the location in the body where the disease begins.

The primary source of national cancer incidence data is the Australian Cancer Database – a data collection of all primary, malignant cancers diagnosed in Australia since 1982.

Estimated new cases of prostate cancer will be diagnosed in 2017, the most common cancer among males

In 2017, it is estimated males will account for 54% of all new cancer cases (72,169 cases) [2]. The risk for Australian males of being diagnosed with cancer before their 85th birthday is 1 in 2 (see Figure 4 below). The most common cancer diagnosis in males is prostate cancer, followed by colorectal cancer, melanoma of the skin, and lung cancer. The World Health Organisation defines mental health as ‘a state of wellbeing in which every individual realises his or her own potential, can cope with the normal stresses of life, can work productively and fruitfully and is able to make a contribution to her or his community.’ Poor mental health may adversely affect any or all of these areas and has consequences for an individual, their family and society.

18% of males aged 16–85 experienced symptoms of a mental health disorder in the previous 12 months.

Some people have more than one chronic disease or health problem at the same time. This is referred to as a comorbidity. Having comorbid chronic conditions can have important implications for a person’s health outcomes, quality of life and treatment choices.

Comorbidity data are presented for the following eight chronic diseases because they are common, pose significant health problems, have been the focus of recent AIHW surveillance efforts, and action can be taken to prevent their occurrence:

The most common comorbidities in males were:

Burden of disease quantifies the health impact of disease on a population in a given year—both from dying early and from living with disease and injury. The summary measure ‘disability-adjusted life years’ (or DALY) measures the years of healthy life lost from death and illness.

In 2011, males experienced a greater share of the total disease burden (54%) than females (46%) [4]. The distribution of overall burden between the sexes varied by disease group. Compared with females, males experienced almost three-quarters (72%) of the total burden from injuries and a greater proportion of the total burden from cardiovascular diseases (59%). Nearly half (47%) of the burden of disease in males is from cancer, cardiovascular disease, and mental & substance use disorders.

For more information see Australian Burden of Disease Study: impact and causes of illness and death in Australia 2011

Over 1 in 2 Australian men have experienced a sexual difficulty

‘Reaching climax too quickly’ was the most common issue across all age groups (between 32% and 38%). Other types of sexual difficulty differed by age: ‘did not reach climax or took a long time’ was the next most common issue in 18–24 year old men, while ‘lacking interest in having sex’ was most common among men of other age groups (25–34, 35–44 and 45–55).

More information on male reproductive health can be found at Andrology Australia.

Life expectancy is expressed as either the number of years a newborn baby is expected to live, or the expected years of life remaining for a person at a given age, and is estimated from the death rates in a population.

Life expectancy changes over time, and differs between population groups [6, 7]:

Life and health expectancies at age 65 are used for monitoring healthy ageing. In 2013–15, life expectancy for men aged 65 (that is, the number of additional years a person aged 65 could expect to live) was just under 20 years [6]. Men aged 65 in 2015 could expect to live an additional 9 years free of disability and around 10 years with some level of disability, including 3 years with severe or profound core activity limitation. This equates to these men living 53% of their remaining life with disability, including 17% with severe or profound core activity limitation [7].

Mortality data, such as premature deaths and potentially avoidable deaths, can help in understanding death and the fatal burden of disease in the population at a point in time.

In 2015, there were 81,330 deaths among Australian males. The leading cause of death was coronary heart disease, followed by lung cancer and dementia & Alzheimer disease. Males had over three times the rate of suicide and nearly twice the rates of death from coronary heart disease and lung cancer as females when adjusted for differences in the age structure of the populations.