” The AIHW reported that ‘Aboriginal and Torres Strait Islander people were 1.5 times more likely to have recently used meth/amphetamine than non-Indigenous people.

According to a 2012–13 National Australian Aboriginal and Torres Strait Islander Health Survey, 2.7 per cent of Indigenous Australians living in non-remote areas reported the use of speed or amphetamine in the past year.

The committee heard that Australia’s Indigenous communities are at a higher risk of developing problematic crystal methamphetamine use. 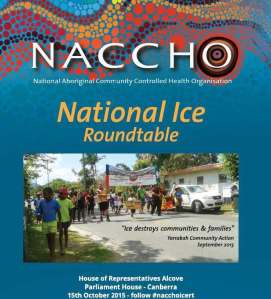 ‘ The Turnbull Government is teaming up with key community groups across the country to tackle the scourge of ice at a grass-roots level, with the next 40 Local Drug Action Teams rolling out.”

The Turnbull Government is today launching the next phase of our National Drugs Campaign to help tackle the use of illicit drugs, particularly ice, among young Australians.

The new television and online campaign illustrates the range of risks associated with drug use and provides information on the range of resources, support and treatment options available. 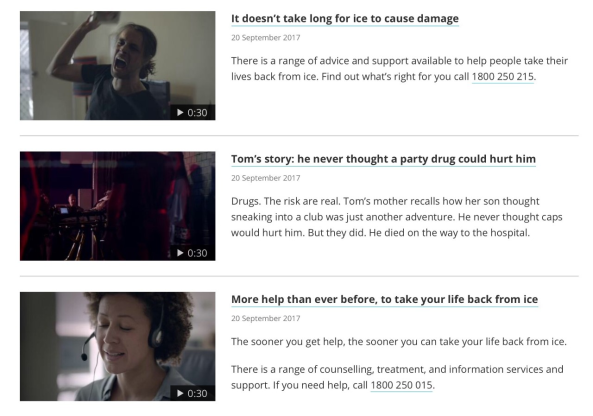 The $10 million campaign has resources for parents, including the Positive Choices Online Portal, to help them learn about drugs and be able to have important conversations with their kids.

We’re also promoting the new National Alcohol and Other Drug Hotline – 1800 250 015 – which links to existing state and territory alcohol and other drug telephone services that offer free and confidential support, information, counselling and referral.

I’d encourage anyone wanting information to visit the new website at www.drughelp.gov.au.

We’re launching the campaign at St Vincent’s Hospital in Melbourne – where doctors and surgeons are all too familiar with the dangers of drugs. They’ve treated people suffering from drug-induced psychosis and teenagers who have taken MDMA and gone into cardiac arrest.

It takes courage for someone to admit they may have a problem with drugs, and it’s the first step to overcoming it.

The Turnbull Government is offering more help than ever before and has committed more than $685 million over four years to reduce the impact that drug and alcohol misuse has on individuals, families and communities.

This includes the unprecedented $298 million investment over four years through the National Ice Action Strategy.
Drug use in Australia is high and continues to rise. In fact, Australia has one of the highest rates of methamphetamine use in the world.

So we need to increase our efforts against illicit drugs at every level – individuals, families, communities and governments.

And as we approach schoolies season at the end of the year, it’s important that young people and their parents are armed with the facts about drugs. That’s why the new campaign also has a focus on party drugs such as MDMA, “caps”, ecstasy and pills.

The 2016 National Drug Strategy Household Survey found that around 3.1 million Australians (more than 15.6 per cent) had used an illicit drug at least once in the past year. This was slightly higher than in 2013 and reflects a steady increase from 13.4 per cent in 2007.

Methamphetamine or ‘ice’ is a particular problem. Recent data from police, health and emergency services suggests the number of ice users in Australia is now well above 200,000 – with more than 60,000 of these people using it weekly or more often.

And in 2016, around 1.8 million people reported being victims of a drug-related incident.

These are truly shocking statistics and highlight the need to take action.

The primary contributors to this cost were: crime, including police and court costs ($3.2 billion); workplace absenteeism ($290 million); child maltreatment ($260 million); and health ($200 million).

For more information about the campaign visit www.drughelp.gov.au

Here you can find a range of evidence-based information and resources. They will help you to stay informed, communicate effectively and implement strategies to protect yourself or someone you care about from alcohol and drug related harm.

Example of resources How to start the conversation about Drug use

The Turnbull Government is teaming up with key community groups across the country to tackle the scourge of ice at a grass-roots level, with the next 40 Local Drug Action Teams rolling out.

This means there are now 80 teams across the country delivering a targeted local response to help tackle drug use and addiction.

More than 300 partnerships have now been formed between local councils, service providers, schools, police, sporting groups and non-government organisations to bring these teams together to prevent and reduce the harms of drugs.

Each team will receive an initial $10,000 to develop locally-focused drug and alcohol prevention activities, with support from the Alcohol and Drug Foundation.

The Turnbull Government is providing $19.2 million for the program which will establish 220 Local Drug Action Teams over the next three years.

The teams will deliver community-led education and mentoring programs, early intervention and prevention programs, and support for vulnerable people to minimise their risk of alcohol and other drug related harms.

This initiative is part of the Government’s $298 million investment over four years to combat illicit drug and alcohol use through the National Ice Action Strategy.

Australians are proportionally using more methamphetamine, including ice, than almost any other country. Conservative estimates suggest there are more than 200,000 ice users in Australia.

We know a community response to an issue like drug and alcohol misuse is one of the best ways to effectively prevent and reduce the harms caused by drugs.

We must also continue to stop these drugs entering Australia and we have already made significant investments in policing our borders and our streets to combat the supply of ice.

The AFP has seized over 12 tonnes of methamphetamine since January 2013. This included a 903kg haul of ice which was discovered in April this year – Australian largest methamphetamine seizure.

The first 40 Local Drug Action Teams rolled out in April this year and delivered local drug and alcohol forums for parents and students, mentoring and professional training for at-risk young people, school based reduction programs, and promoted the role of local sporting clubs.

Interested community groups can apply for the next application round, which opens in late 2017.

Information can be found on the Alcohol and Drug Foundation website.

One comment on “NACCHO Aboriginal Health and #Ice : Counselling , treatment and information : Helping our mob take their lives back from drugs”