” Aboriginal and Torres Strait Islander are between two and three times as likely to have a stroke than non-Indigenous Australians which is why increasing stroke awareness is crucial.

Too many Australians couldn’t spot a stroke if it was happening right in front of them. We know that in Aboriginal and Torres Strait Islander communities this awareness is even lower. We want all Australians, regardless of where they live or what community they’re from, to learn the signs of stroke.”

Regional and rural communities are bearing the brunt of Australia’s stroke burden, according to an updated Stroke Foundation report released today.

“No Postcode Untouched: Stroke in Australia 2017”, found 12 of the country’s top 20 hotspots for stroke incidence were located in regional Australia and people living in country areas were 19 percent more likely to suffer a stroke than those living in metropolitan areas.

Stroke Foundation Chief Executive Officer Sharon McGowan said due to limited access to best practice treatment, regional Australians were also more likely to die or be left with a significant disability as a result a stroke.

“In 2017, Australians will suffer more than 56,000 strokes and many of these will be experienced by people living in regional Australia,’’ Ms McGowan said.

“Advancements in stroke treatment and care mean stroke is no longer a death sentence for many, however patient outcomes vary widely across the country depending on where people live.

“Stroke can be treated and it can be beaten. It is a tragedy that only a small percentage of Australian stroke patients are getting access to the latest treatments and ongoing specialist care that we know saves lives.”

See Video from the Project

Stroke Foundation Clinical Council Chair Associate Processor Bruce Campbell said Australian clinicians were leading the way internationally in advancements in acute stroke treatment, such as endovascular clot retrieval. However, the health system was not designed to support and deliver these innovations in treatment and care nationally.

“It is not fair that our health system forces patients into this cruel lottery,’’ A/Professor Campbell said.

“There are pockets of the country where targeted investment and coordination of services is resulting in improved outcomes for stroke patients.

“Consistent lack of stroke-specific funding and poor resourcing is costing us lives and money. For the most part, doctors and nurses are doing what they can in a system that is fragmented, under-resourced and overwhelmed.”

No Postcode Untouched: Stroke in Australia 2017 report and website uses data compiled and analysed by Deloitte Access Economics to reveal how big the stroke challenge is in each Australian federal electorate.

This data includes estimates of the number of strokes, survivors and the death rate, as well as those living with key stroke risk factors. It is an update of a Stroke Foundation report released in 2014.

The report shows the cities and towns where stroke is having its biggest impact and pinpoints future hotspots where there is an increased need for support.

Ms McGowan said stroke is a leading cause of death and disability in Australia, having a huge impact on the community and the economy. Media release

“Currently, there is one stroke in Australia every nine minutes, by 2050 – without action – this number is set to increase to one stroke every four minutes,’’ she said.

“Stroke doesn’t discriminate, it impacts people of all ages and while more people are surviving stroke, its impact on survivors and their families is far reaching.

“It doesn’t have to be this way. Federal and state governments have the opportunity to invest in proven measures to change the state of stroke in this country.”

In the wake of the report Stroke Foundation is calling for a funded national action plan to address the prevention and treatment of stroke, and support for stroke survivors living in the community.

Key elements include: A national action campaign to ensure every Australian household has someone who knows 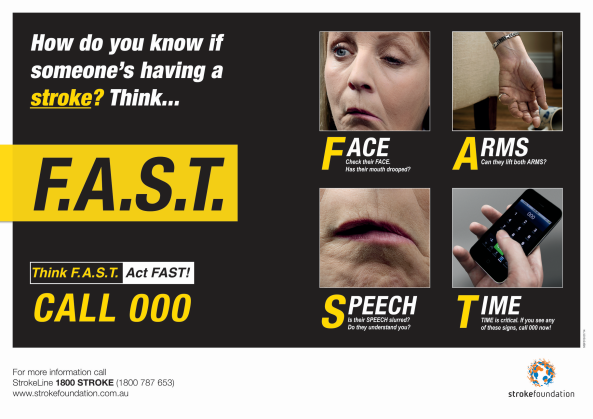 The No Postcode Untouched:Stroke in Australia 2017 report was funded by an unrestricted educational grant from Boehringer Ingelheim.