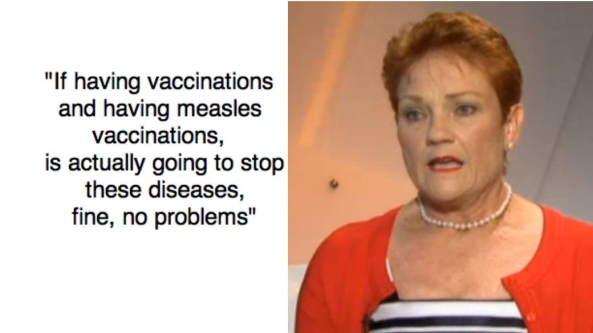 ” The ‘IF’ doesn’t belong in this sentence.

The AMA and doctors everywhere are happy to report that vaccines save lives, control and eradicate disease. Always trust a doctor before a politician.

Parents who wish to discuss health issues regarding their children, including routine immunisation, are very welcome to ask their GP.

Alternatively, ‘The Science of Immunisation:

Questions and Answers’ booklet is held in very high regard by doctors. Check it out: https://www.science.org.au/learning/general-audience/science-booklets/science-immunisation “

” DOCTORS, health experts and politicians have lashed One ­Nation senator Pauline Hanson for peddling ignorant and dangerous advice to parents about vaccinating their children, after she urged them to “go out and do their own research”.

As reported in Daily Telegraph see full report below

These pages provide some references and information about immunisation for Aboriginal and Torres Strait Islander peoples. ”

The No Jab, No Play policy was introduced to counter an alarming drop-off in the rate of vaccination, which was exposing children to a range of deadly diseases.

Only parents of children (less than 20 years of age) who are fully immunised or are on a recognised catch-up schedule can receive the Child Care Benenifit, the Child Care Rebate and the Family Tax Benenefit Part A end of year supplement.

The relevant vaccinations are those under the National Immunisation Program (NIP), which covers the vaccines usually administered before age five.

These vaccinations must be recorded on the Australian Childhood Immunisation Register (ACIR).
• Children with medical contraindications or natural immunity for certain diseases will continue to be exempt from the requirements.
• Conscientious objection and vaccination objection on non-medical grounds will no longer be a valid exemption from immunisation requirements.
• Families eligible to receive family assistance payments and have children less than 20 years of age, who may not meet the new immunisation requirements, will be noti ed by Centrelink.
• To support these changes, the ACIR is being expanded. From 1 January 2016, you will be able to submit the details of vaccinations given to persons less than 20 years of age to the ACIR.

Ms Hanson’s outspoken comments — in which she also appeared to liken the government’s No Jab, No Pay policy to blackmail and the actions of a “dictatorship” — were also linked to previous remarks she has made that seem to connect vaccinations with autism.

“What I’ve heard from parents and their concerns about it … and what I have said is I advise parents to go out and do their own research with regards to this,” Ms Hanson said.

The right-wing senator went on to argue that parents needed to “make an informed decision”.

“What I don’t like about it is the blackmailing that’s happening with the government,” she told ABC TV. “Don’t do that to people. That’s a dictatorship. And I think people have a right to investigate themselves.”

“The way she has framed it is that somehow a non-medical parent is going to make a more informed decision about the value of vaccination than the entire medical profession,” Professor Frankum said.

“That’s very dangerous, really. It is going to give people the idea that they can avoid vaccination (for their kids).”

Prof Frankum also took aim at Ms Hanson’s apparent attack on the government’s No Jab, No Play policy, which prevents parents from receiving childcare rebates and certain other welfare payments if they have not properly vaccinated their children.

“It is not forcing parents to vaccinate their children but it’s sending the message that the government is trying to look after children,” he said.

Some groups continue to link vaccinations to autism and claim they pose serious health risks, but the study that popularised the supposed link has since been discredited and debunked.

The No Jab, No Play policy was introduced to counter an alarming drop-off in the rate of vaccination, which was exposing children to a range of deadly diseases.