“A lot of the time, you’ll get a machine that has a lot of connections and you’re there for about 10 to 15 minutes setting up, whereas the iECG is in a comfortable position in your hands and it’s just two fingers on the back of a probe on the back on a phone,” he said.

“People are quite happy to do it, they’re quite surprised that a screening tool can be so small and so mobile.”

At the heart of the research is community consultation.

The programs and rollout have been designed with local people on the ground because they are more in touch with what the community needed.”

NACCHO Articles about strokes and recovery

The iECG replaces a traditional ECG machine to detect atrial fibrillation, which is responsible for one third of all strokes in Australia.

A pilot at the University of Sydney is trialling the technology in far western New South Wales to create the first snapshot of atrial fibrillation rates in Aboriginal people.

One of the benefits is that it can be carried out by local healthcare workers with minimal training and effort.

One of the Aboriginal health officers, Helen Ferguson, said it was so easy, some of the patients thought they were joking.

“It was so funny because when we first got the little machine we would say to the people, ‘now we’ve just come to have a little yarn to you, this is a machine that we’ve got and it’s like a little ECG machine and instead of having all the cords on and it’ll give you a reading of either normal or AF [atrial fibrillation]’,”she said.

“And then they’d say ‘oh go away, it’s only a phone’, and they thought we were pretending.”

The patient places their fingers on connectors and holds on for 30 seconds.

The file is processed by an app on the phone which gives results almost immediately.

Once an abnormality is picked up, the patient is referred to a specialist in Sydney or they can book an appointment with visiting specialists who come to the area about once a month.

One of those specialists, Dr John Watson, is a leading neurologist and said that stroke, as a result of atrial fibrillation, could be among the most severe — but it can also be easily treated with anti-coagulant medications.

“A lot of the time, the stroke can be the presenting feature of the atrial fibrillation,” he said.

It is the beginning of a new way of treating people in remote and inaccessible areas.

As a concept, telehealth has been around for a while but new technology is helping to push that along.

“We may have a cardiologist in Sydney who says, ‘every Thursday morning, for three hours, I’m free, I’m available to help run a clinic anywhere else in the country’,” he said.

Treating Indigenous people in communities rather than sending people to cities for treatment, where possible, could be more successful and more cost effective.

Dr Susannah Tobin  said culturally appropriate health care was not just important, but vital if patients were to see the benefits.

“If we can deliver them where they feel comfortable … then they’re more likely to be able to take advantage of it and to see the benefit,” she said.

How you can share positive good news stories about Aboriginal Community Controlled Health ? 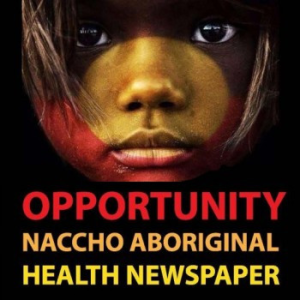 We are now looking to all our members, programs and sector stakeholders for advertising, compelling articles, eye-catching images and commentary for inclusion in our next edition.