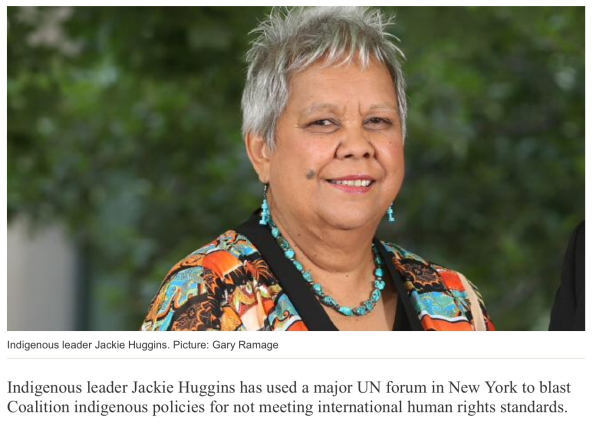 “The flagship policy for overcoming Indigenous disadvantage, Closing the Gap, in reality … ­advances policies and actions that explicitly remove and deny indigenous control and decision making”,

“Similarly, the Closing the Gap in Indigenous Disadvantage strategy – “a long-term, ambitious framework that builds on the foundation of respect and unity provided by the 2008 National Apology to Aboriginal and Torres Strait Islander Peoples” – has been only partially successful.

Aboriginal and Torres Strait Islander people still have a shorter life expectancy, and suffer from more adverse life stressors across their lifetime. But the mainstream health system lacks cultural sensitivity, discriminates against Indigenous people, and fails to tackle the root causes of their poor health”

Ms Huggins, co-chair of peak indigenous body the National Congress of Australia’s First ­Peoples, told the UN Permanent Forum on Indigenous Issues there were significant failings around constitutional reform, closing the gap on indigenous disadvantage, social policy in the Northern Territory and with indigenous outcomes in the justice system.

The government-funded process to consider changes to recognise indigenous people in the Constitution included “no proposal from the government to correct the inequality disorder, nor is there a guarantee that this position will change”, Ms Huggins told the world forum.

The flagship policy for overcoming indigenous disadvantage, Closing the Gap, “in reality … ­advances policies and actions that explicitly remove and deny indigenous control and decision making”, she said.

The Stronger Futures policy for addressing social issues in the NT had led to indigenous people being “stigmatised upon the basis of their race and … patronised through centralised and paternalistic bureaucratic structures”.

And income management plans had led to “the dignity of the people in (remote) communities (being) impacted by the mandatory regimes that are in place to restrict expenditure on alcohol, gambling and tobacco”.

Ms Huggins told the forum that disproportionately high indigenous incarceration rates could be improved by properly funding legal assistance — spending that was reduced in this month’s budget — and “by moving from a ‘tough on crime’ to a ‘smart on crime’ solution”.

Indigenous Affairs Minister Nigel Scullion, who last week ­described the congress as not being a representative body, said yesterday that Ms Huggins “should spend less time at UN ­forums in New York and more time in remote indigenous communities”.

But Labor indigenous affairs spokesman Shayne Neumann said that Mr Scullion’s comments about the congress being unrepresentative “failed to mention the growing membership of more than 8400 individual members and 180 organisational members’’.

The congress, which was ­established in 2010 as a successor to the troubled ATSIC but with a structure that placed it outside of government and not required to deliver services, was defunded in the 2014 Hockey budget.

Australia is being held back by its unresolved relationship with its Indigenous population. Drawing on attempts at reconciliation overseas, this series of articles explores different ways of addressing this unfinished business. Today, we survey where Australia is at.

Recent news that Patrick Dodson had become a senator for Western Australia was met with widespread enthusiasm.

For those of us watching, working and waiting for “reconciliation” between Aboriginal and Torres Strait Islander and other Australians, the imminent elevation of this highly regarded Aboriginal statesman to the legislature seemed appropriate and inspired.

But it’s just one step. And we need to ask why it’s taken so long to achieve even this most basic indicator of genuine reconciliation – in terms of recognition of Australia’s Indigenous history, culture, identity and, indeed, sovereignty.

In many ways, the “great Australian silence” about Indigenous history, pointed out by eminent anthropologist W.E.H. Stanner back in 1968, still endures in this country some 50 years later.

In 2008, the federal parliament’s Apology to the Stolen Generations was widely acclaimed as a significant and overdue acknowledgement of white Australia’s often damaging interaction with Aboriginal and Torres Strait Islander peoples.

But despite the symbolic and therapeutic meaning attributed to the apology, Aboriginal and Torres Strait Islander children are still removed from their families at a far higher rate than non-Indigenous children. And they’re greatly over-represented in out-of-home care.

Constitutional and legislative deficiencies in their recognition and the disproportionate incarceration of Aboriginal and Torres Strait Islander peoples also persist. Even the current discussions about a referendum for meaningful constitutional recognition seems to have become protracted and confounded.

Similarly, the Closing the Gap in Indigenous Disadvantage strategy – “a long-term, ambitious framework that builds on the foundation of respect and unity provided by the 2008 National Apology to Aboriginal and Torres Strait Islander Peoples” – has been only partially successful.

Aboriginal and Torres Strait Islander people still have a shorter life expectancy, and suffer from more adverse life stressors across their lifetime. But the mainstream health system lacks cultural sensitivity, discriminates against Indigenous people, and fails to tackle the root causes of their poor health.

The effects of more than 200 years of dispossession, racism and discrimination have left many Aboriginal and Torres Strait Islander people with low levels of education, an inability to gain meaningful employment, over-representated in the prison system, and appalling housing conditions.

Too many recommendations made for and by Aboriginal and Torres Strait Islander people over decades have never been acted on. Instead, poorly designed policies made on their behalf are funded and enacted.

More weighty and bewildering government reports will not assist reconciliation, and even if they make governments feel like something is being done.

But it’s not all bleak. Community-led movements such as Change the Record, Just Reinvest NSW and Empowered Communities are all working, in different ways, to tackle Indigenous disadvantage.

Part of their success comes from changing the way Aboriginal and Torres Strait Islander people’s issues are talked about and addressed – from one of deficit in which people are described as problematic to one of empowerment and strength.

Reconciliation is not an outcome or a goal as much as a relationship and an ongoing journey. It’s vital for the long-term well-being of settler nations – for their identity, history, polity and nationhood.

But whatever its terms or whoever its participants, reconciliation will be no more than a series of slogans if settler Australians cannot come to a just understanding with Aboriginal and Torres Strait Islander Australians.

There have been many achievements, disappointments and challenges since then in the process of healing the deep rift between Indigenous and non-Indigenous Australians.

But despite all the backlashes, put-downs, trivialisation and wedge politics, Aboriginal and Torres Strait Islander people have come back stronger, more articulate, more practical, more resilient and surer of their capacity to contribute. And they’re also surer of what they expect from their contribution.

Reconciliation provides a legacy platform for our continued growth and prosperity as a nation. It’s time to make it happen.

This is the penultimate article in our series on efforts towards indigenous reconciliation in settler countries around the world.

Send your Aboriginal Health issue message to Canberra for

Advertising and editorial is invited from