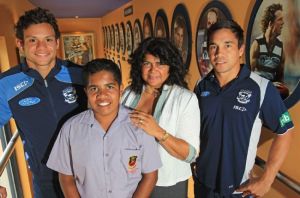 Minister for Indigenous Health Warren Snowdon said at a meeting with Wathaurong Aboriginal Cooperative today that the Victorian Aboriginal Community Controlled Health Organisation (VACCHO) had received $150,000 in funding to deliver programs in partnership with the Cats, and to look at ways of rolling out the program across Victoria.

“Starting in the Barwon region, the Cats‟ players will explain what Deadly Choices they have personally made. They will encourage young people to say no to smokes and adopt healthy lifestyle choices, including connecting to culture, healthy eating and physical activity,” he said.

In some activities, kids are put through their paces with footy drills and get to share a barbeque lunch with their AFL heroes.

Mr Snowdon said the campaign is funded as part of the rollout of Regional Tackling Smoking and Healthy Lifestyle activities across Australia.

“This approach was first developed in Queensland by the Institute of Urban Indigenous Health, which engaged NRL stars including Sam Thaiday and Preston Campbell as sporting role models for the Deadly Choices strategy Queensland,” Mr Snowdon said.

Smoking has been found to be responsible for 17 per cent of the life expectancy gap between Aboriginal and Torres Strait Islander people and broader Australian population.

Tobacco smoking directly causes a third each of cancer and cardiovascular disease amongst Aboriginal and Torres Strait Islander Australians and accounts for one-fifth of deaths.