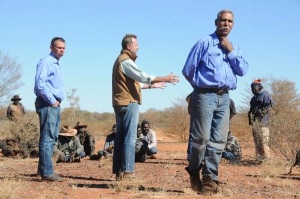 In Closing the Gap, Governments should not be judged simply on good intentions or the amount of money spent, they should be judged on results, Shadow Indigenous Affairs Minister Senator Nigel Scullion said.

“Minister Macklin’s speech about progress in closing the gap as usual focused on the money spent, bureaucratic structures and plans and performance measured against inputs rather than outputs,” Senator Scullion said.

“I agree with Macklin when she says that after five years now is an appropriate time to reflect on what Labor has achieved. Arguable progress in only three of the six closing the gap targets is not much of a scorecard.

“Closing the gap is a bi‐partisan task and we share the Government’s good intentions absolutely, but in all things delivery has never been a strong suit of the Gillard Government.

“I also agree with Macklin that we need sustained change over time, but you cannot simply flick the switch to autopilot and walk away. You can’t simply cough up the money and then let the bureaucrats waste it.

“Saying sorry was an important national milestone and generated great expectations. Kevin Rudd himself declared on the day that progress in housing would be his priority. Their SIHIP housing project in the NT in particular has been a disaster with the task of eliminating overcrowding still ahead of us despite the massive expenditure.

“The reduction in the infant mortality rate has been on track to achieve the target since 1998 under the Howard government. Halving the gap for indigenous students in year 12 was also headed in that direction before the Rudd/Gillard Government came to power.

“They say they will achieve the target for access to early education for 4 year olds in remote areas.

Frankly I do not believe the spin, it smacks of more bureaucratic smoke and mirrors. The centrepiece of their remote area strategy was to be the construction of 38 preschools – but it turns out that most of these are located in non‐remote areas and it is not clear how many have been built.

While they praise themselves for the supposed number of enrolments the Prime Minister herself admitted that the results did not indicate the level of actual attendance‐and that is what really counts.

“The gap in the unemployment rate has only reduced by less than two percent since 2006. Macklin did not mention the abysmal NAPLAN results in her speech as they show the education gap has gone backwards in 14 of the 20 NAPLAN indicators since 2011. Sadly the life expectancy gap appears not to have demonstrably changed.

In Closing the Gap, Governments should not be judged simply on good intentions or the amount of money spent, they should be judged on results, Shadow Indigenous Affairs Minister Senator Nigel Scullion said.